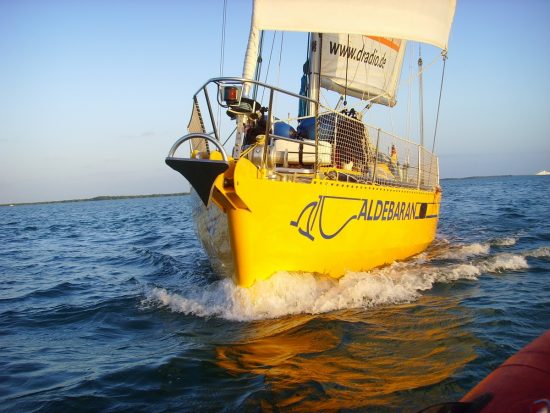 Aldebaran examines the sediments of the North Sea. (c) ALDEBARAN 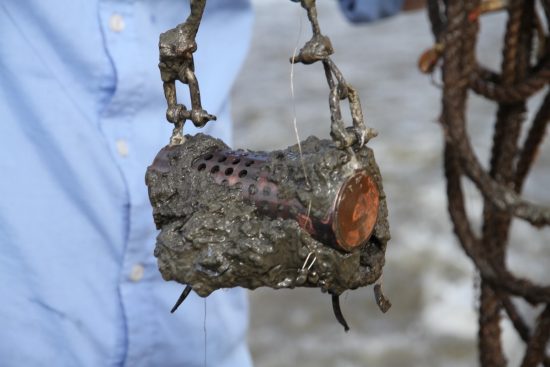 One of the sample collectors used to examine the concentration of contaminated microplastics. (c) Patrick Schibat, ALDEBARAN 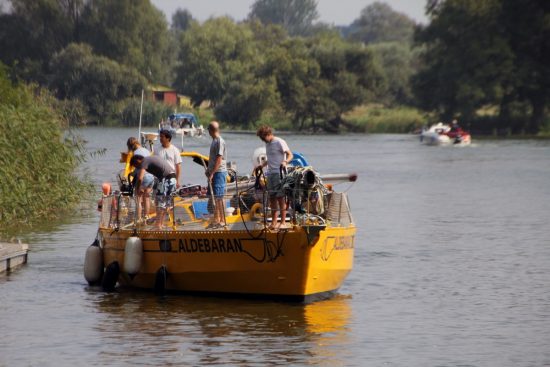 Examination near the floodgate of Rathenow. (c) ALDEBARAN

Plastic particles act like magnets to bind pollutants and toxins

A research team has revealed that microplastics have the ability to bind
much more pollutants and toxins than previously thought. In fact, they
are generally three to four times more contaminated than the already
contaminated sediment.

The team had examined the sediments in the
estuaries of the Elbe, Weser, Trave and Bodden, as well as the North
and Baltic Seas.

The greatest amount of pollution had been found near
the sewer treatment plant in Lübeck.

Since 2015, Professor Dr Gesine Witt of the Hamburg University of
Applied Sciences (HAW Hamburg) and her team have been studying
microplastic litter in the sediments in the marine environment, working
within the framework of the Federal Ministry of Education and Research
(BMBF).

Over three months, two expeditions focusing on microplastic
contamination in the sediment were conducted on board the ALDEBARAN
research vessel
.

To date, it has been ascertained that plastic granules act upon the
pollutants in the same way as magnets; the longer they are in the
water, the more toxins would bind to them and form into a sort of
poisonous cocktail. In this way, they would be consumed by small marine
organisms like worms, mussels and fish, and eventually find its way
into the human food chain.


So far, the research team suspects that the concentration of
contaminated microplastics was at least as high as that of the
surrounding sediment.

Elaborating on their findings, Prof Witt said in
German, “Using fifty sample collectors, we have shown how prominently
microplastics are found in the sediments. The plastic particles are
actually three to four times more contaminated than the sediment, which
is already contaminated. In addition, we now better understand where
particles of different sizes end up in the water or sediment.


The team also discovered that silt containing sediment was able to
absorb significantly more pollutants than suspended silt, assuming that
there was an increased load of microplastics in the marine environment.
Hence, the results of the examined silicone samples from the sample
collections and the comparative laboratory tests on the
pollutant-binding properties of polyethylene has found that
polyethylene binds about twice as many pollutants as silicone. Prof
Witt regards this as a cause for concern, as polyethylene is currently
widely used in the industry.

The results of the survey show that the microplastics from the Weser
and the sediment from the Elbe, in particular, have been polluted with
polychlorinated biphenyls (PCB).

In these areas, depending on the lipid
solubility, the pollutant concentrations are in the range of 1.5 to 280
microgrammes for every kilogramme of polyethylene.

Another group of substances – polycyclic aromatic hydrocarbons (PAH) –
was discovered in the sediments of the Stralsund harbour and the port
of Marienehe in Rostock. This is mainly due to the oil and oil products
such as diesel fuels (some of which are carcinogenic) that had entered
the water.

The highest pollutant level, up to 1,400 microgrammes of
fluoranthene per kilogramme, of  silicone was measured near the Lübeck
treatment plant. However, the team had also measured high pollutant
levels at the Weser estuary and the Warnow at Rostock. 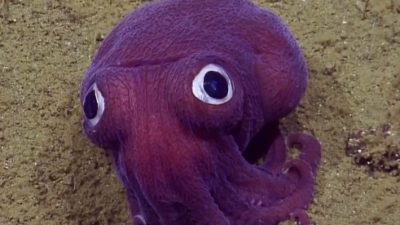