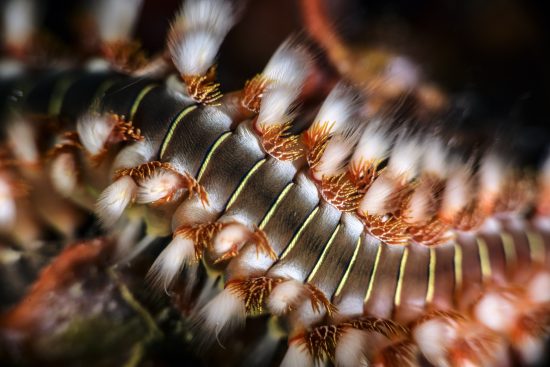 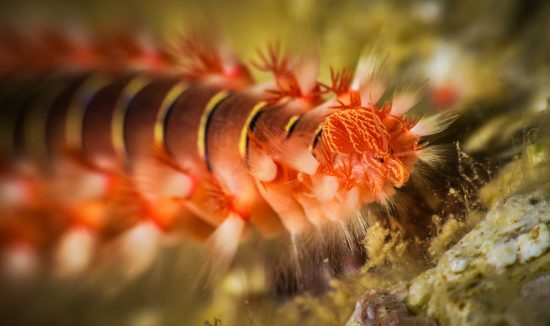 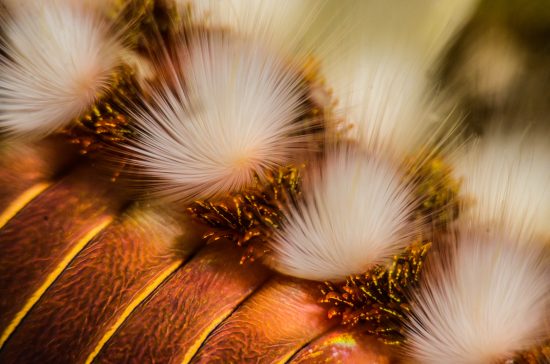 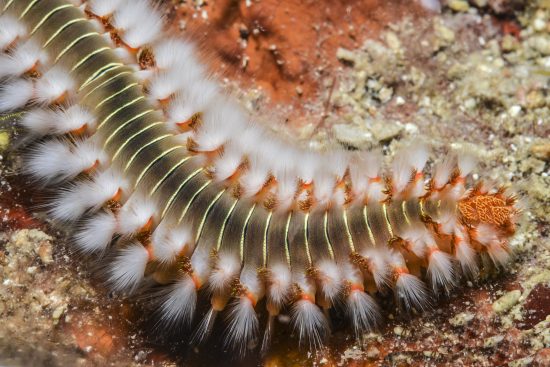 The bearded fireworm is a marine bristle worm that lives throughout the tropical coastal waters of the Atlantic Ocean. It can be found all the way from the west coast of Africa, to the eastern coast of North America, including the Gulf of Mexico and the Caribbean Sea. It is abundant in the Mediterranean Sea, especially around the Italian coast.

Bearded fireworms are typically 10 to 12 centimeters in length, but they can grow up to 35 centimeters, roughly the size of your forearm. They are timid creatures that are mostly active during the night.

The bearded fireworm belongs to a larger group of animals, annelids, commonly known as segmented worms. As it is evident from their name, these worms are divided into segments, each containing a set of identical elements. You are probably quite familiar with one of the most famous annelids, the earthworm, which you have undoubtedly seen on the ground after heavy rainfall.

Unlike their smooth ground cousins, Polychaetes, or bristle worms, are predominately marine animals that have fuzzy leg-like structures called parapodia, which all work in unity to provide them with significant agility in swimming, burrowing, and feeding. On top of their “legs” these worms have bristle-like structures called chaetae, from which they have gotten their name. Members of the family Amphinomidae, commonly known as fireworms, which include the bearded fireworm, have bristles that are hollow inside and loaded with powerful venom.

If you are lucky enough to be in the right place at the right time, you may get to experience an amazing sight: bearded fireworms ascending to the surface of the sea and emitting a beautiful bioluminescent light to attract their mating partners. Female bristle worms and their male counterparts shine greenish light back and forth until they meet and start the mating ceremony.

Juvenile fireworms live as tiny larvae, floating among plankton, eventually developing into adult worms, and committing to a life crawling among corals and rocks on the sea bottom.

Despite their slow speed, fireworms are fierce predators. They prefer feeding on different cnidarians, such as corals and anemones, but they are not picky eaters, and won’t turn down a meal of small crustaceans, mussels, squids, or a nice algae salad.

Bearded fireworms play an important role in the health of the corals in their habitat. They directly damage reefs by feeding on the soft tissue of the corals, however, when the reef ecosystem is in balance, fireworms do not have a strong impact on the health of the reef. The problem emerges in endangered and damaged reefs, where the corals are already struggling to survive, and pressure from fireworm predation might overbear the reef. Besides their direct impact on coral, bearded fireworms also serve as “hideouts” for coral-bleaching bacteria during the winter. The bacteria, sensitive to low water temperatures, “hides” in fireworms by infecting them, and spreads to corals when the temperatures go up in spring.

Among their superpowers, they have the amazing ability to regenerate their bodily segments. This enables them to reproduce by simply dividing their bodies into two halves that regenerate back into two separate, full-sized individuals. Regeneration ability also comes in handy when their sharp and venomous bristles fail to protect them from the attacks of different reef fish that prey on them.

Their bright color and spikey white bundles of bristles often grab divers’ attention, and some might even be tempted to interact with them. Others may unknowingly brush against them as they easily camouflage themselves in the surrounding rocks. This is the hard way of learning why these creatures are called fireworms.

When startled, bearded fireworms flare their bristles, and shoot the needle-like spikes, loaded with a powerful neurotoxin, into their enemies. If the toxin successfully penetrates the skin, it will interact with the cells in the nervous system and produce a strong burning or itching sensation and numbness in the stung area. In severe cases, a person can also experience dizziness and nausea due to the circulation of the neurotoxin in the bloodstream. If this happens to you, there’s no need to worry, the bearded fireworm's venom is not deadly. The uncomfortable feeling in the affected area will pass in a few hours, and you can use adhesive tape to try to remove any bristles that remain in the wound and speed up the recovery. 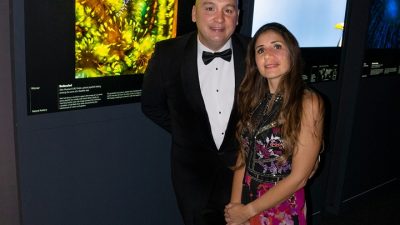