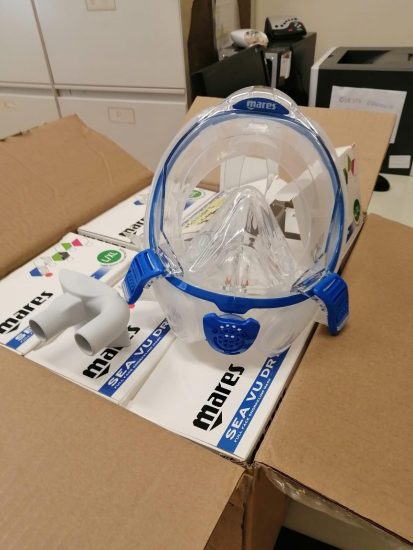 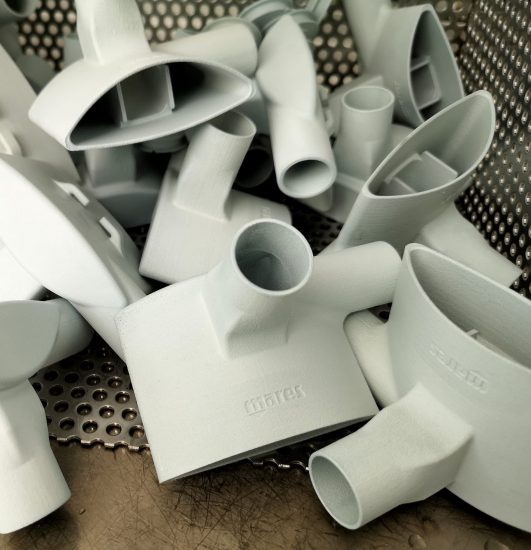 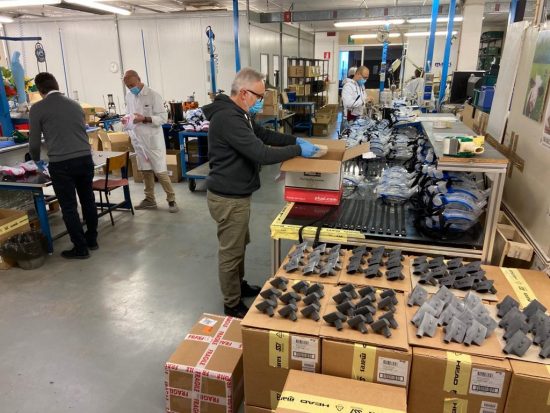 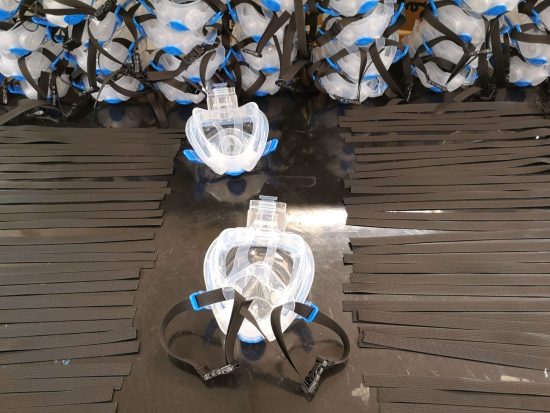 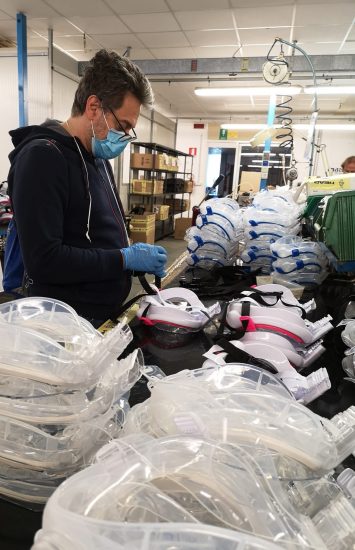 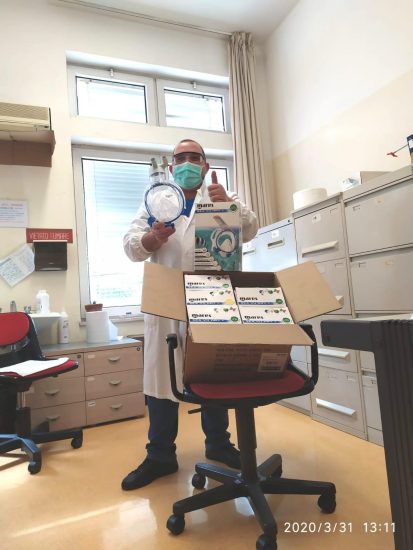 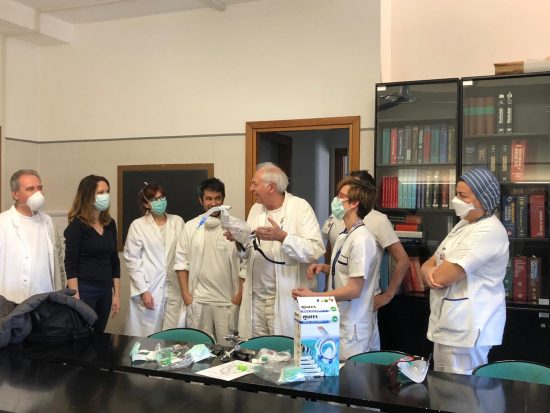 A message from Sergio Angelini, Chief Technology Officer at Mares...

We all have fond memories of some trip or another. Sometimes it is the places we visited. Other times it is the people we met. I want to tell you about a recent trip I took and the people I met. Some of these people I met in person, some I met on the phone or on email, and some I have not met directly. But all of them have affected me deeply.

You may have heard about what Mares did with the snorkeling masks. In spite of the tragic circumstances that led to it, it’s a beautiful story. And this wants to be a tribute to the people that made that story possible. Because without the combined effort of all these people, this would never have happened.

It all began with myself and Valerio Palmieri, replicating what Isinnova had done well before us, adapting our masks for use in fighting the COVID-19 emergency. It was not clear what Valerio and I were trying to do, because it was all improvised. We developed the adapters but then what? We had no budget to do any 3D printing and our own printer was certainly not up to the task. Then two phone calls took place. Michele Sambo followed by Marco Martelli, from Nuovamacut. Totally unsolicited they offered to provide us with 3D printed parts if we needed them, having at their disposal a network of companies willing to contribute. Nuovamacut sells 3D printers by HP, technological wonders that make industrial-grade parts at the touch of a button. The companies willing to contribute were mostly their clients, but some joined the group along the way after they heard about what we were doing. Completely unsolicited, just wanting to contribute in some way during these dire times.

Mares is getting a lot of attention for what we did, but Valerio and I would still be playing with a dozen parts ordered over the internet had it not been for Michele and Marco and their jolly network of companies. Marco by now is like family to me, although I have yet to meet him in person. He single-handedly took over everything relating to getting the parts produced. It may not sound like much but we talked, whatsapped and emailed from 7 am to 11 pm most days. The fact that we changed configuration 3-4 times along the way did not make it any easier. But he plowed on, and the parts started showing up like they were falling from the sky. Which in a way they were.

I am going to list the companies and the people who made these parts, one by one. I would like you to read these names out loud, and after each name I would like you to say THANK YOU also out loud. Our masks, with the adapters provided by these people, have helped others that really needed it. I just received yet another message, and in a way it sums it all up: a patient came in with oxygen saturation at 56%. Within two hours on our mask, he was back up at 96%. That’s all the confirmation I need in order to feel we were justified in doing what we did (which was pulling approx 1000 masks from our inventory, modifying them a bit, adding the 3d printed adapter and shipping them off).

As I write this, about 900 masks have been delivered directly to hospitals across Italy, and I expect every single one of them is in use, helping people breathe, helping them fight COVID-19. So here goes (remember, read out loud!):

The last company, MATERIA, is in our home town of Rapallo and they collaborated with us directly. They called us up and asked if we needed help. And we did. We used them to print parts before launching big jobs with Marco and his network. Because 3D printing has the advantage of speed, but when the printing takes place on the other side of the Appennines, you need a day to get the parts delivered (there is one special case that I will mention later). When Materia finished printing, I only had to drive 1,5 km to pick up the parts. Order in the evening, get the parts by the next afternoon. This was very helpful in ensuring that what we were asking Marco to print would be ok. Because each job runs about €1000 in material, so the generosity of these people is not only about their time and the usage of their machine. And several companies ran more than one job on their machines. You don’t want to waste that.

By the way, talking about delivering parts, special thanks go to the express service company Bartolini, who would dispatch its drivers with less than half a day’s notice, sometimes with less than two hours‘ notice, to all corners of Italy so that we could actually have the parts the following day. This at a time when couriers had to deal with somewhat (to say the least) chaotic conditions. And on our end, Andrea Oneto who interfaced with them uninterruptedly. I mentioned one special case: Ferrari, who delivered the parts with their own truck, which came on a dedicated trip from Maranello to my door step then turned around to return to Maranello. Wow.

There are other people I want to thank. I had started modifying and assembling the masks in my shed, because Mares as a non essential business was not allowed to operate. On a Sunday morning I delivered two samples to the hospital in Lavagna, where I live, and I found that the strap was too soft and did not allow the tension needed to compensate for the overpressure needed in some treatments. So that same afternoon Enrico Oneto met me at the Mares building and he devised a quick but effective solution. At the same time, thanks to just one post on LinkedIn by Marco, the demand for these masks started to increase rapidly, with more and more hospitals contacting us directly enquiring about the masks, and it became obvious that my garden shed was not going to cut it. Step in Mirco Costa, our VP of everything that makes the wheels turn. Between him and Daniele Lorenzini, our HR manager, the company received a special permit to operate. We gathered a handful of coworkers who donated their time and we set off to work: for every mask we had to remove the snorkel, substitute it with the adapter (previously cleaned in an ultrasound bath), flip the front valve, cut off the tail ends of the strap and substitute them with webbing straps and a buckle. And we needed to ship. Gabriele Canella, Giampiero “Poppi” Gastaldi, Oscar Bernardi, Luca Limongi, Marco Lazzari and Mirco Costa took care of everything while I dealt with phone, emails and whatsapp.

As I write this, hardly two weeks have passed from the beginning of the story. Feels like months! But it has been a tremendous experience, in which solidarity among people won out on everything else. People coming together for the greater good without asking for anything in return. Thank you Valerio, Michele S., Marco M., Max, Manlio, Simone, Andrea L., Michele P., Elia, Lorenzo, Gian Luca, Massimiliano, Gabriele V., Giovanni, Riccardo, Andrea O. Gabriele C., Poppi, Oscar, Luca, Marco L., Mirco.

A closing remark: I acted without plan and without a budget. Mirco as VP supported and pushed me. So we pulled inventory and started giving stuff away for free. Our top management was far away, stuck in other countries because of global lock downs, and were not fully aware of what was going on. But when they did, they supported the idea fully. Thank you Gerald, thank you Stefan.

And thank you to all the doctors, nurses, ambulance drivers, and all the others that are actually saving people’s lives. I met and talked and whatsapped and emailed with all of those involved in this project, and they are the most unselfish and formidable people of them all. Interacting with them has been a life changing experience for me.

The voyage is not over yet, there is still a long way to go. But what we have accomplished so far has convinced us to move on to a second phase, and that is the preparation of a mold for injection molding and industrial production. One new character is added to the mix, Alberto Venerandi of Mold&Molding in Cornaredo (MI), who in less than two weeks will have finished the mold. As I write this I have just applied for validation of the mask as a personal protection device, but we are considering applying also for validation of the mask as a medical device. Many doctors and hospitals I spoke to believe in it. It’s a new path for us, but one worth taking. And all this thanks to the the people that came along in this voyage. Together, I hope that we will have contributed in a positive way to overcoming the virus. 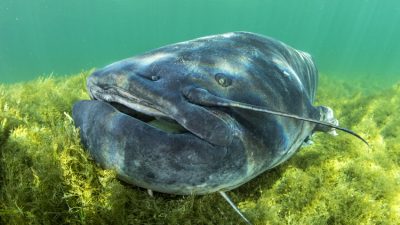