Phoresis in the Mediterranean 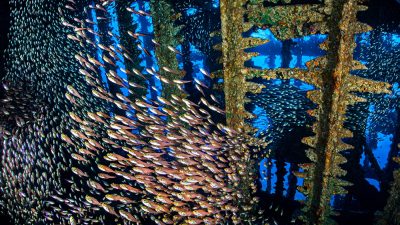 This fascinating video, captured by Mares Ambassador Pasquale Vassallo in the Mediterranean Sea, shows a Sand Crab hitching a ride on a Barrel jellyfish!

The small Sand Crab, or 'Liocarcinus vernalis', of the Portunidae family, lives in shallow waters with sandy, muddy bottoms, including Italian coastal waters, and is an excellent swimmer.

The Barrel jellyfish, also known as a 'Sea Lung' or 'Rhizostoma pulmo', of the Rhizostomatidae family, is a very common pelagic species found in the Mediterranean Sea, and the largest jellyfish found there, reaching up to 10 kg. The sting of its tentacles does not usually pose a serious danger for humans, although in water it can release a toxic substance that causes minor abrasions, severe itching and slight burning.

The relationship between these two organisms, filmed in Pasquale's video, is called 'phoresy' or 'phoresis', a form of active transportation where an organism, defined the 'phoront' or 'phoretic' (the crab), is mechanically carried by the other, the 'host' (the jellyfish) without having any negative consequences on it or harming  it. This works to the phoront's advantage, as it is able to colonize new areas quickly, and move away from the areas it previously inhabited which may now be dominated by predators.

To learn more about the exciting marine environments you dive in, why not check out a Marine Ecology course from our friends at SSI?