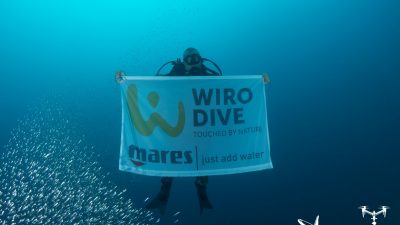 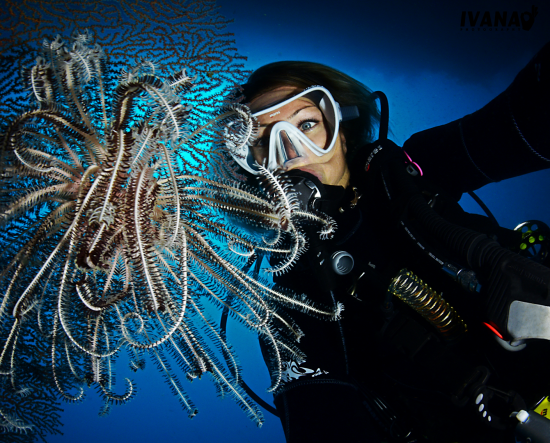 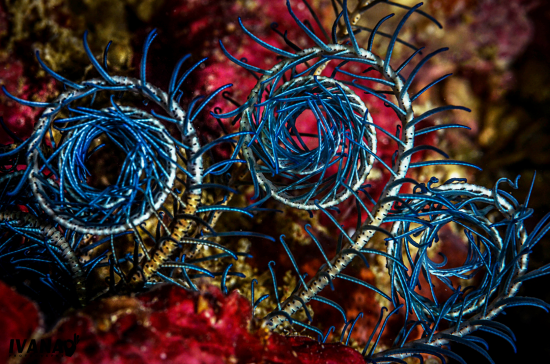 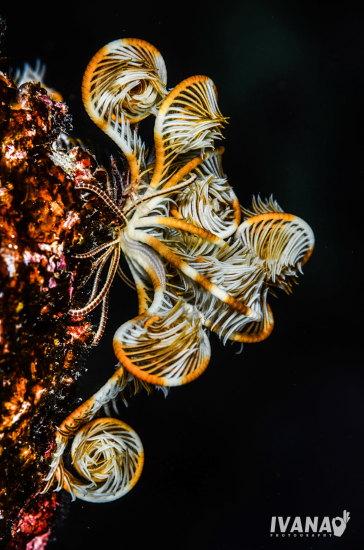 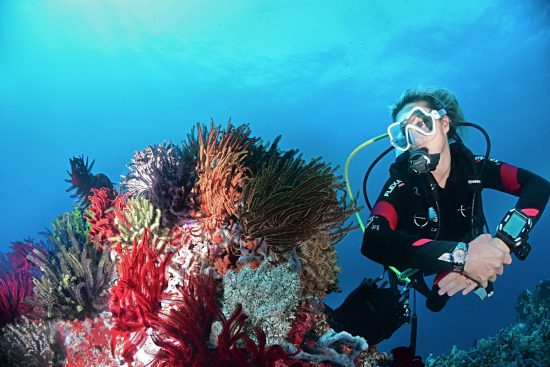 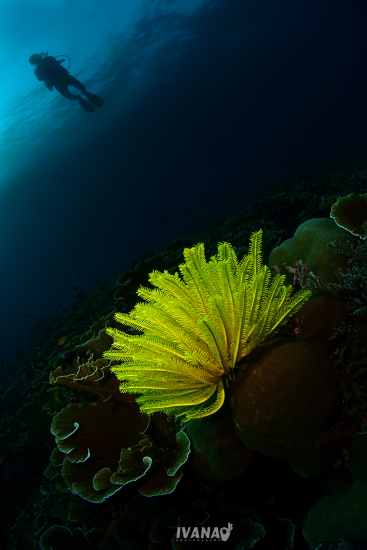 Featherstars are more scientifically known as crinoids – coming from a Greek word meaning ‘lily-like’- so it comes as no surprise that they are related to deep water sea lilies. Widely spread, can be found worldwide, in all oceans, but the most colourful are usually found in shallow tropical waters.


There are over 600 species of featherstars, but identification of distinct species is a taxonomist nightmare, they are tough to identify, sometimes differing only slightly internally.

They spend most of their lives on the seabed anchored down by claws, ‘cirri’, that hang down in a ring structure on their bottom.  Known as the most primitive of echinoderms they can be the prettiest with a fantastic range of colours and patterns.

Even though they are echinoderms, they do not look like the common five-armed seastars. Each feather on featherstar is an actual arm, and some species have up to 200 arms present. These arms start off with five arms, however (just like their other cousins), but the arms divide into much more near the bases. Like other echinoderms, they have central body and arms extending from it, but unlike most, their mouth is positioned on top of their body. The arms of featherstars are lined with pinnules (side branches) which gives them their characteristic feather-like appearance. These are further lined with tube feet which sieve through the particles and select food to go into the food groove along the arm.  Crinoids feed on plankton which gets caught in their arms. Their actual body is soft and delicate, so it needs to be protected by a special cup the “centrodorsal ossicle”, which is also very small in comparison with other echinoderms.

The interesting fact is that species living in warm tropical waters usually have more arms than the species living in colder water, these only have ten arms. Juveniles of all species have ten arms, but in warmer water, they break off their arms on purpose, and two more grow in a place where one was broken off. This process called “autotomy” is repeated until the desired number of arms is reached. Like other starfish, if some of the central body is present, they can regenerate from a single broken off arm.

Most crinoids have male and female individuals and to reproduce they release sperm and eggs into the water column through pores in their arms. Some species keep their eggs near pinnacles and brood them. Larvae develop from fertilised eggs which attach to the seabed and metamorphose into a little-stalked crinoid resembling a mini sea lily that takes
months to grow into an adult form of detached featherstar.

They like to live with sea fans and provide home and shelter for shrimps, lobsters or small clingfish, especially if living in a group where they can create a crinoid forest based on a rocky substrate. These creatures don’t like to move and only do so when disturbed or attacked. If annoyed, they crawl away or swim off by using the movement of their arms. Watch out for the pretty creatures, however, especially in areas of current but not exposed to heavy wave action.

They do sometimes have a bad habit of clinging onto diving equipment or wetsuits using their claw-like ‘cirri’. 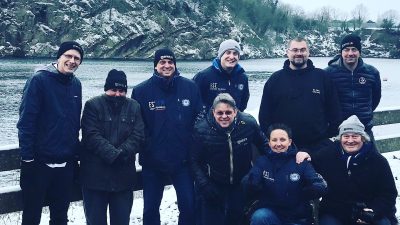