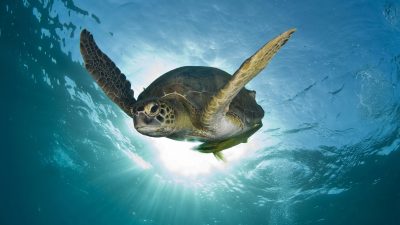 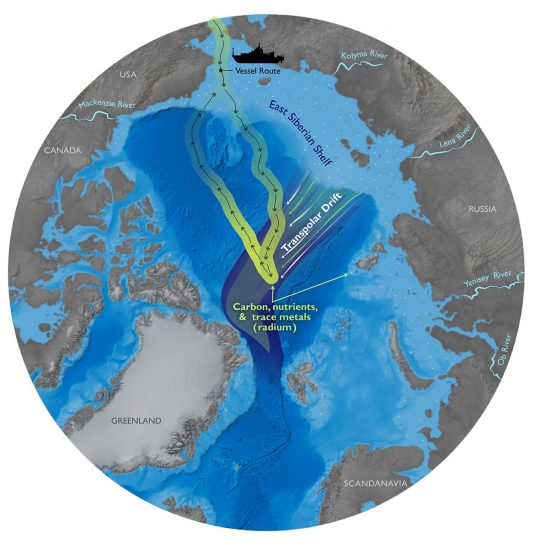 Currents in the Arctic, like the Transpolar Drift, distribute nutrients and other chemical compounds in the Arctic Ocean. Artwork: © Natalie Renier, Woods Hole Oceanographic Institution

The decline in sea ice near the Arctic shores leaves more open water near the coast so that winds can create waves. The increased wave action stirs up sediments, releasing radium and other chemicals that are carried to the surface and released into the open ocean by currents such as the Transpolar Drift. Graphics: © Natalie Renier, Woods Hole Oceanographic Institution 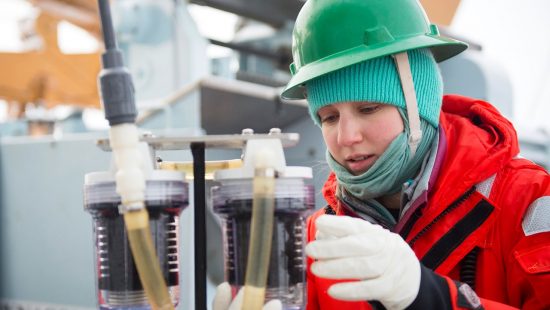 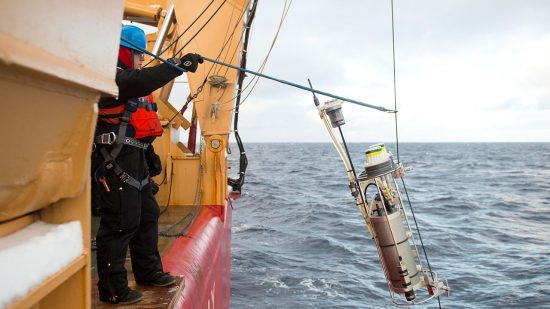 Scientists deploys a pump into the Arctic Ocean, which can filter more than 1,000 litres of seawater over four hours. Scientists measured seawater chemistry from the western Arctic Ocean to the North Pole. Photo: © Cory Mendenhall, U.S. Coast Guard

Scientists find surprising evidence of rapid changes in the Arctic

Scientists have found surprising evidence of rapid Arctic climate change: in the middle of the Arctic Ocean near the North Pole, they discovered that radium-228 levels have nearly doubled in the last decade.

The findings indicate that major changes are occurring along the coast - for the sources of radium are the land and shallow continental shelves that surround the ocean. In turn, these changes along the coast could also lead to more nutrients, carbon and other chemicals entering the Arctic Ocean and causing a dramatic impact on food webs and animal populations.

The research team, led by the Woods Hole Oceanographic Institution (WHOI), suggests that melting sea ice has left more open water near the coast so that winds can create waves there. The wave action reaches down to the shallow shelves and agitates sediments, releasing radium that is carried to the surface and into the open ocean. The same mechanism will probably bring more nutrients, carbon and other chemicals to the Arctic Ocean. This fuels the growth of plankton, thereby giving rise to a significant impact on fish and marine mammals, and change the Arctic ecosystem.

Scientists have long used radium-228 to track the flow of material from land and sediments into the ocean. It is a naturally occurring isotope produced by the radioactive decay of thorium in sediments. But unlike thorium, it dissolves in water, and scientists can track the sources, amounts, rates and direction of its flow, according to Lauren Kipp WHOI, lead author of the current study, recently published in the journal Science Advances. In the summer of 2015, Kipp conducted the radium measurements during a two-month journey aboard the icebreaker Healy, travelling to 69 locations from the western edge of the Arctic Ocean to the North Pole.

To their surprise, the research team noted that radium-228 concentrations in the central Arctic Ocean had increased significantly since the last measurement in 2007.

The team studied the trajectories of sea ice drifting in the ocean and discovered currents of ice (and thus water) flowing northward from the northern coast of Russia towards the middle of the Arctic Ocean, where the radium concentrations had increased. The pattern is aligned with the Transpolar Drift, a strong current that flows in the same direction that could transport radium from coastal sources.

The researchers concluded that the excess radium must have come from sediments in the East Siberian Arctic Shelf off Russia, the largest continental shelf on Earth. It is relatively shallow with an average depth of about 52 metres, but extends 1,450 kilometres offshore and contains a huge reservoir of radium and other chemical compounds.

Something must have changed along the coast to cause the dramatic increase in radium in the middle of the Arctic Ocean. Scientists believe that a warming Arctic environment has reduced sea ice cover, allowing for more wave activity, stirring up sediment and mobilising more radium.

But other factors may also play a role. Increased wave action can also lead to more coastal erosion, causing more terrestrial sediment to enter the ocean. Warming temperatures can thaw permafrost, releasing more material into the ocean, while increasing runoff from rivers and groundwater can transport more radium, nutrients, carbon, and other material into the Arctic.