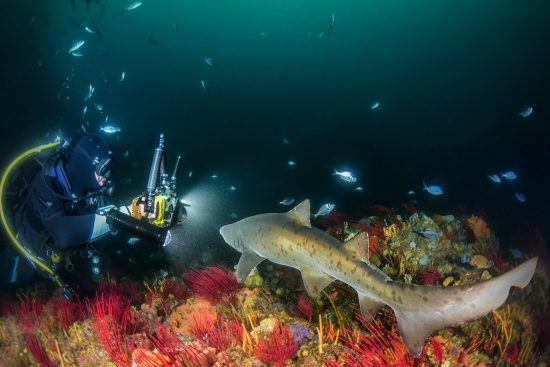 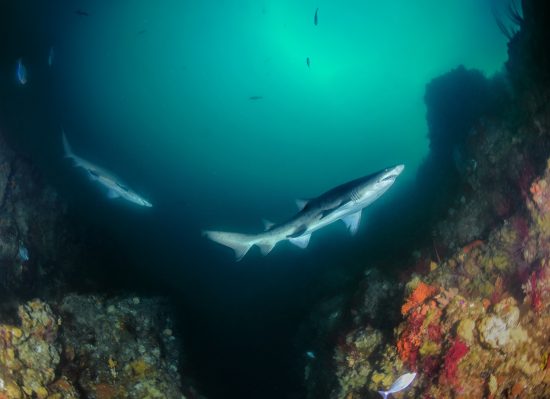 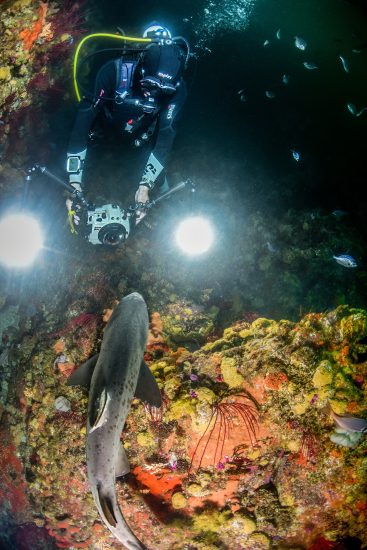 The Ragged Tooth Shark lives in oceans and seas around the world, and has different names in different regions. Around the coast of South Africa, they are known by the name "Ragged Tooth Shark," a name that comes from their vicious-looking teeth. In the USA, they are known as "sand tigers," however, they are not closely related to the infamous tiger sharks (Galeocerdo cuvier). In Australia, they are called "Grey Nurse sharks" and yet again, they have no connection to nurse sharks (Ginglymostoma cirratum).

Ragged Tooth Sharks enjoy shallow coastlines and reefs. These sharks dwell the sandy coastal waters during the day and hunt on the sea bottom by night. With their needle-like teeth they prey on bony fish, other sharks, rays, crustaceans and squid.

Most shark species rely on the large amount of oil in their livers to keep them buoyant, but Ragged Tooth Sharks have a different, unique strategy. They go up to the surface of the water to catch air, but they do not breathe it. Instead they gulp the air and store it in their stomach,  allowing them greater stealth in hunting and ambushing their prey.

These sharks are ovoviviparous, meaning that their eggs are fertilized and hatched inside the mother's body where they continue to live and grow up to more than half of their full adult size. During pregnancy, the mother continues to produce eggs, as once the pups are hatched, they start to feed on unfertilized eggs and even other embryos in the womb. It's a real shark-eat-shark world for the Ragged Tooth Shark pups.

According to the IUCN, Ragged Tooth Sharks are critically endangered. They take five years to reach sexual maturity, mate only once every two years and take almost a year to give birth to only two pups, resulting in a very low reproductive rate, one of the lowest among sharks. This makes them specifically vulnerable to human stressors to their environment, such as overfishing, as it takes a long time for their populations to build up.

For diving in South Africa, we went with https://expert-tours.de/en/