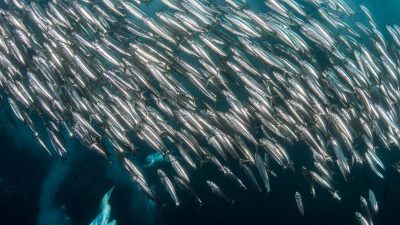 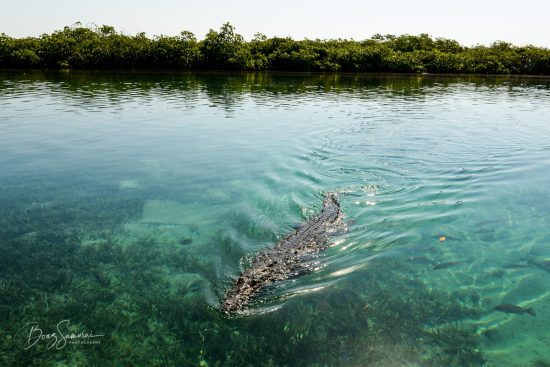 A curious crocodile swims towards our boat. Picture: Boaz Samorai 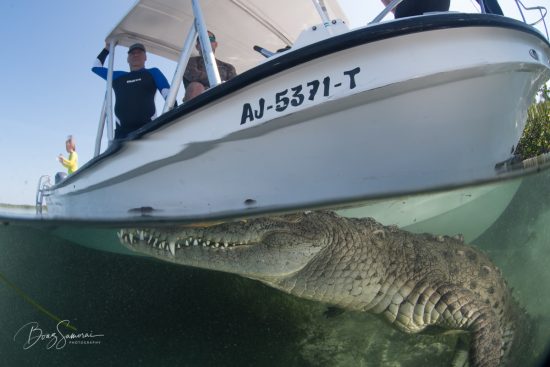 The view is quite good from the boat. Picture: Boaz Samorai 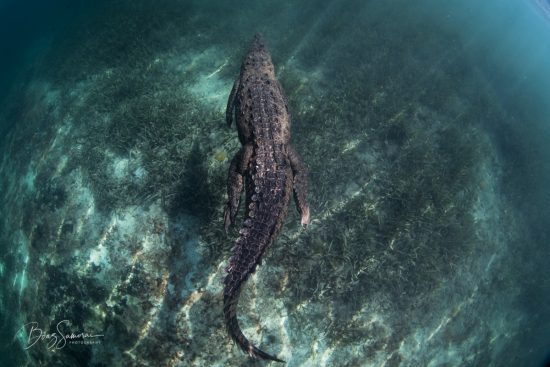 The crocodiles can reach a length of 6 meters. Picture: Boaz Samorai 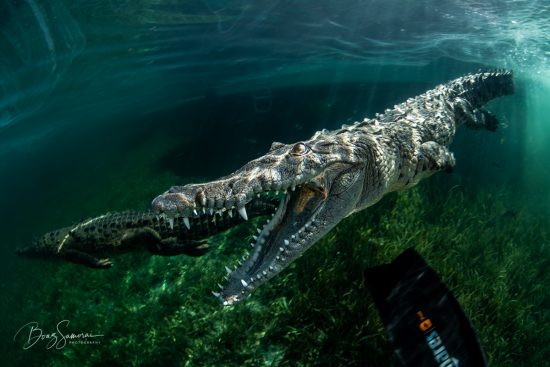 A crocodile fighting a bit too close to me... Picture: Boaz Samorai 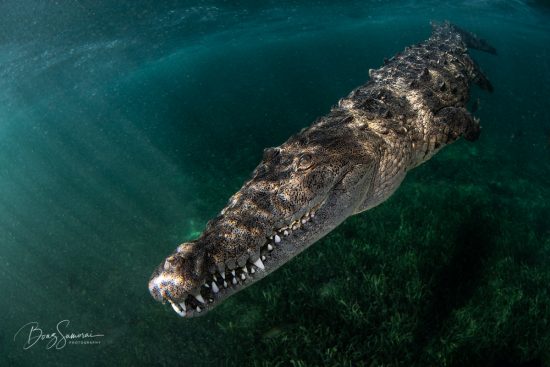 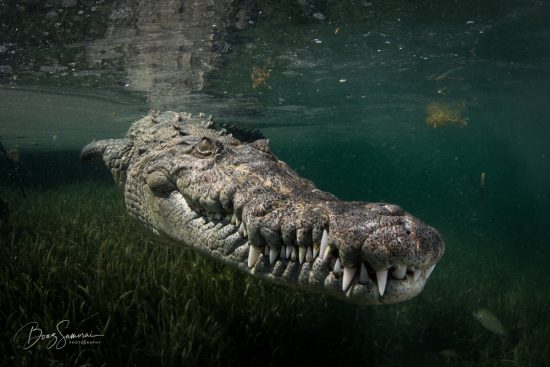 The crocodiles like to check their reflection on the dome port. Picture: Boaz Samorai 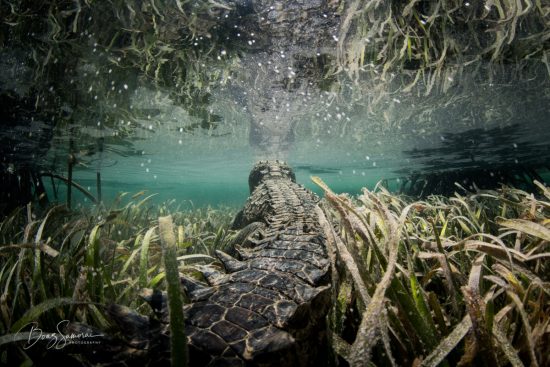 The crocodiles like to rest on the sea grass between the mangroves. Picture: Boaz Samorai 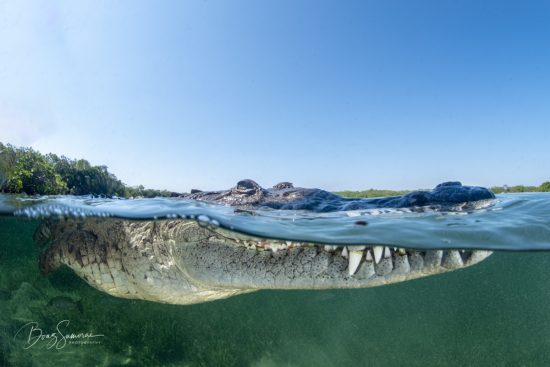 A crocodile resting on the surface. Picture: Boaz Samorai 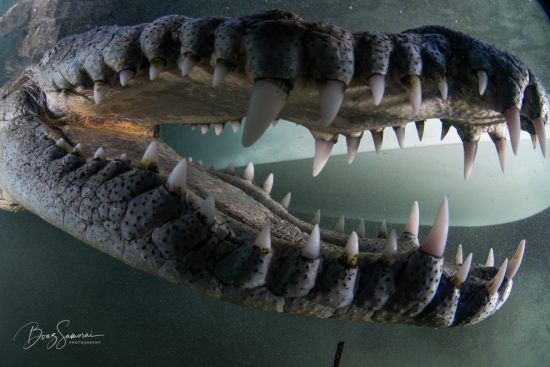 It's a good idea to keep the camera as a barrier between you and the crocodile. This is the reason. Picture: Boaz Samorai

I can still remember the first time I went in the water with a crocodile. Feelings were intense as I entered the water with one juvenile crocodile who swam by our boat to check us out, but after just a few seconds these feelings changed from stress to happiness, realizing that the crocodile was not that interested in me, just like most other creatures in nature.

This experience took place at the mangrove lagoons of Jardines de la Reina – The gardens of the Queen, a huge chain of islands off the coast of Cuba. This marvellous nature reserve is an untouched pearl at the heart of the Caribbean Islands that has been left untouched and almost unvisited due to the communist government of Cuba over the last 60 years.

The lagoons are situated at the 3rd biggest barrier reef in the world and act as a breeding and nursing water for lots of species of marine animals that spend the first period of their lives here, protected from most of the predators of the open water. The lagoons are a vast area of shallow water stretched over kilometers of water filled with mangrove plants and coconut trees. The only living creatures on land are Iguanas and Hutias, an endemic rodent the size of a rabbit, and the crocodiles which feed on both.

The crocodiles are of the American crocodile species and can reach 6 meters in length and weigh over 900 kg. They can live in saltwater and feed on fish, seabirds, and more. Normally they are very shy, but some of them have come to learn not to fear human beings and become very curious when our boats show up and anchor in the bays of Jardines de la Reina. Only 5 boats are allowed to visit this archipelago, all from the same government company, so it's well organized and as uncrowded as possible!

About 2 hours after our boat reached the anchor boat, one crocodile had already shown up! We got ready to enter the water. I used my Mares Flexa 3.2.2mm wetsuit, a pair of Mares Razor Pro freediving fins, my X-Free mask and snorkel and entered the water with my underwater camera set. I choose this equipment for dive holidays in tropical places with nice and warm water that include the option to freedive and snorkel as well as SCUBA dive - I can use them for both and save on bringing another set of fins, or wetsuit specific for SCUBA or freediving. A little tip – I use the Razor Pro fins because, when SCUBA diving, we may need to rest on a rocky bottom, and these fins are strong enough for such conditions.They are also very fun for current maneuvers when doing a drift dive!

Our local guides had instructed us to enter the water gently and to keep our eyes on the crocodile, using our camera as a barrier between us and the
crocodiles. I entered the water first and immediately the crocodile came towards me to check me out. We both floated on the surface with a mild current and the crocodile posed perfectly for my camera! The other divers couldn't wait any longer and all came into the water for a closer look. The crocodile swam between us and when we came close to it, he would open his mouth to show off his big teeth! It was a little alarming at first, but then without any aggressive movements it was actually kind of cool to look into his mouth!

After a few moments, the crew shouted to us that another crocodile was coming and that we should come closer to the boat and get ready to leave the water in the case that they fought. Some crocodiles get very territorial, and this was the case… As soon as the other crocodile arrived, which was much bigger than the first one, a fight started between them. For me it was very exciting and interesting to watch, but for some of the people it was too much, and they got back in the boat.

The crocodile fight was quick and included some open mouth clashing and water spraying, then the smaller crocodile backed away from the area. The
'new' crocodile was relaxed and swam between us, checking us out, and then it just hovered on the surface, keeping his eyes on the boat.

After the first visit, I have returned to Cuba every year for the past 7 years and accompanied many people to swim with the crocodiles and change the
way they think about them. They are a marvellous part of nature and we should protect and preserve them!

ปั้มไลค์ on Jul 07th 2020
Like!! I blog quite often and I genuinely thank you for your information. The article has truly peaked my interest.

Gali on Mar 13th 2019
This is amazing!! Great shots! I wonder if You make places look so much than they are in real life - I’ll just have to fly over to Cuba 🇨🇺 as soon as possible to see for myself ;) 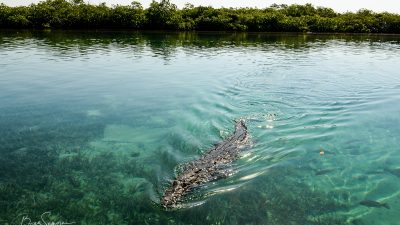