Diving into the jaws of history 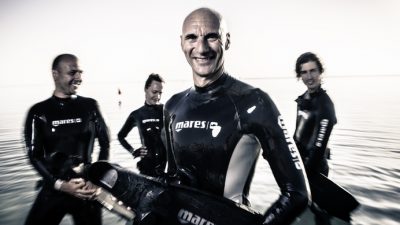 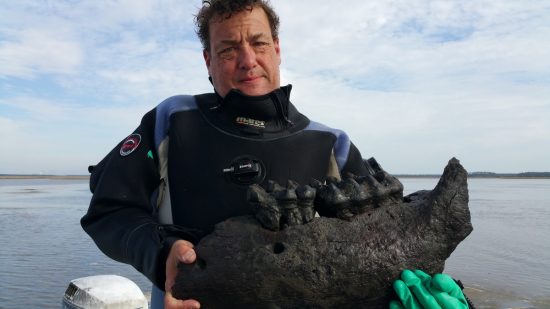 Bill with the jaw of a mastodon (c) Bill Eberlein 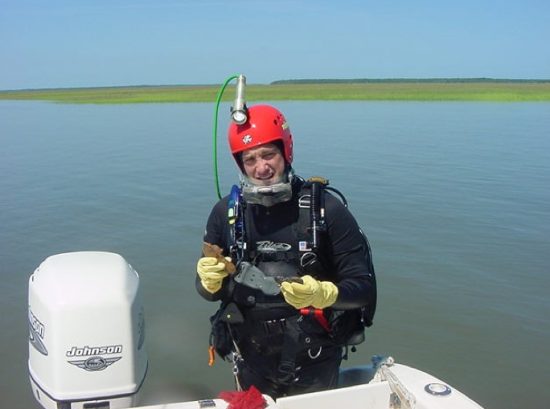 Bill after one of his "tooth recovery" dives (c) Bill Eberlein 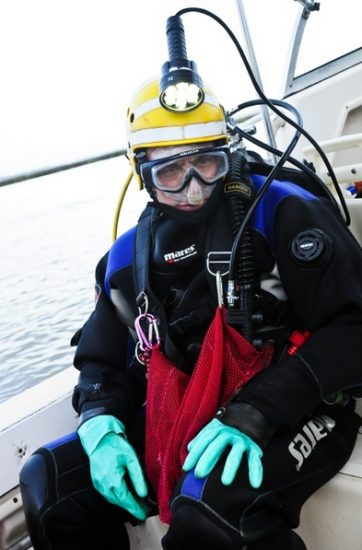 Bill in his gear - ready to start another dive... (c) Bill Eberlein 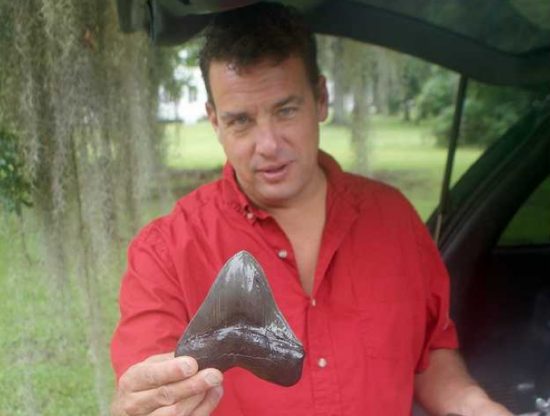 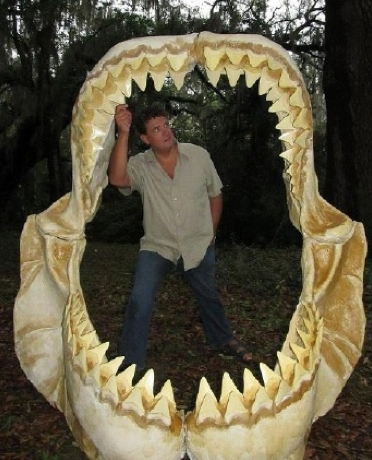 Bill within the Jaw of a Megalodon (c) Bill Eberlein 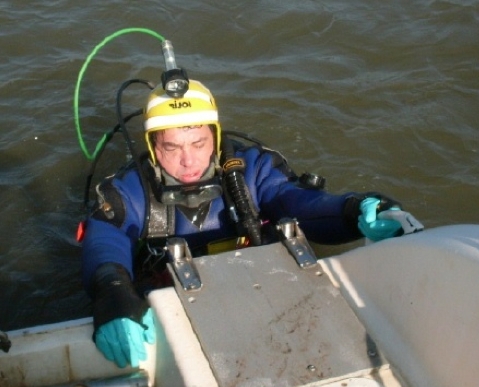 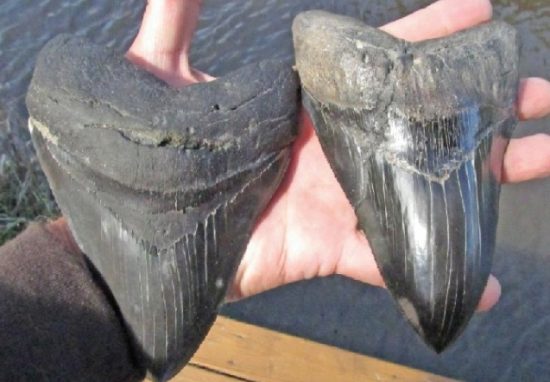 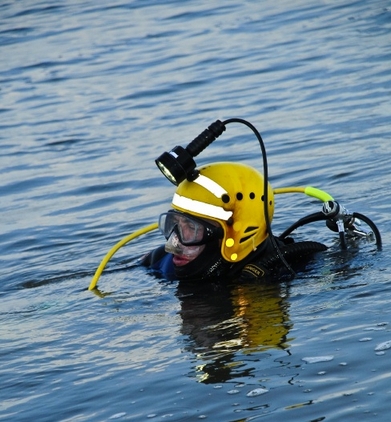 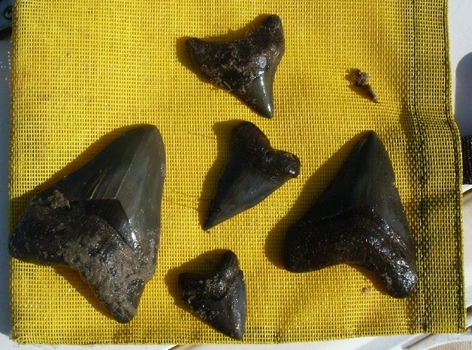 Some of Bills Megalodon Teeth

On the trail of the giant prehistoric sharks.

William “Bill” Eberlein has been diving since 1986, and he's all about
teeth. Not his own, but the teeth of large creatures long extinct. You
see, Bill is an underwater fossil hunter who dives into the coastal
waters of Georgia to salvage fossilised teeth from the bottom.
Recently, he discovered a mastodon jaw, causing a stir in academia and
the media.

“I was doing my normal dive when I felt what I thought was a fossilised
log but when I felt the molars, I knew I had found something very
rare,” said Bill. The jaw had been hidden under the mud, so it had to
be dug out. Bill described the jaw as being really heavy to bring up 15
metres to the surface, as it weighed about 60 pounds.

Mastodons have been extinct for more than 12,000 years. They were
mammoths which stood up to three metres high and weighed more than
6,000 kilogram’s. Enormous but cuddly in appearance, these aggressive
creatures roamed the Earth in search of food. The mastodon jaw that
Bill salvaged had two fist-sized teeth complete with the roots. The
teeth were loosely seated in the jaw, but could be removed. It was an
impressive find.

Today, Bill mostly focuses on the teeth of the prehistoric giant shark
called the megalodon. Measuring more than twenty metres long, they were
as large as the sperm whales of today. Not to be messed with, these
predators were so huge that a adult human could easily fit in the jaw,
amid the hundreds of razor-sharp serrated teeth.

Bill has already recovered hundreds of megalodon teeth from the muddy
and brackish waters of Georgia’s coast. His biggest discovery to date
measures more than 17 centimetres high and 12 metres wide, weighing in
at over a kilogramme. It had small serrated teeth along its flanks that
made it the perfect megalodon tooth.

Every tooth is unique
Having taken up sport diving as a hobby, Bill went on to become a
member of a search & rescue team, and then instructor. After
moving to Georgia in south-eastern United States, he accompanied a
fossil diver into the murky coastal waters of Savannah one day, where
the freshwater river met the saltwater of the ocean. “From the onset, I
was intrigued. After I found my first megalodon tooth, I got hooked. I
drove every chance I got,” said Bill, of his early days in the field.
By early 2001, he had collected so many megalodon teeth that he decided
to sell some of them. Seven years later, he resigned from his job as an
IT teacher at a technical school and devoted himself fully to the
search for underwater fossilised teeth.

He set up his website (www.megateeth.com), together with an online shop
where those interested can browse his range of megalodon teeth and buy
one for about US$150 onwards. The finer pieces are sent to museums
worldwide, and these can cost more than US$1,000 each. Every tooth is
unique and is individually certified by Bill. Most of the teeth have
been salvaged by Bill and have not been repaired or modified, unlike
most of the other megalodon teeth being sold online or at eBay.

Bill dives at depths of 10 to 20 metres, mostly amid zero visibility.
The 50-watt lamp he carries can barely allow him to read his
instruments. Imagine being in that situation for nearly one and a half
hours, which is the duration he sometimes remains underwater.

"This is not for beginners. While you’re looking for the remains of the
dead, you’re also bumping into what’s alive. Accidentally grabbing a
stingray is pretty normal, and I fear them more than I do sharks. They
come flying out of the mud with their barbed tail thrashing around.
When you blindly grab something and it moves, you jump back as far and
as fast as you can. […] What I really hate is when I grab what I think
is the smooth enamel surface of a megalodon tooth, and it turns out to
be the shell of a blue crab offering a painful pinch,” said Bill, with
a laugh.

Bill has seen it all and so knows how to react in all circumstances. He
has even encountered sharks that bump into him in the darkness as they
search for prey in the coastal waters. In a relaxed tone, he continued,
“Tiger, hammerhead and bull sharks visit these waters, even alligators.
Thankfully, these carnivores seem to have no interest in me.”

In addition, the currents make the dive an unpredictable experience, as
they may transport Bill to another part of the river.  Boats and ships
also pose a danger, as he explains: “Underwater, you can hear them
above you, but it is impossible to tell how close they are. The sound
is distorted, and, for this reason, I must use extreme caution when I
surface.” And if one loses sight of the boat in a strong current and
additionally it is necessary to add a safety decompression stop; the
whole operation isn't all that relaxed.

To date, for almost ten years, Bill has been indulging in a hobby that
has become his profession. People often ask him how he remembers when
it is time to ascend to the surface when he cannot read his
instruments. “I surface when it gets hard to breathe,” is his casual
response. However, you never know exactly what William “Bill” Eberlein
is thinking when he says this with a broad smile on his face. 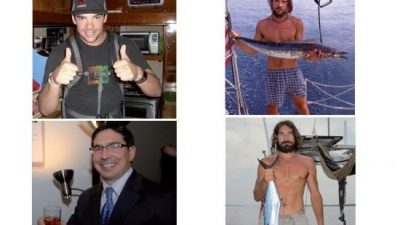