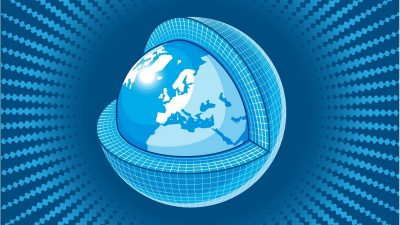 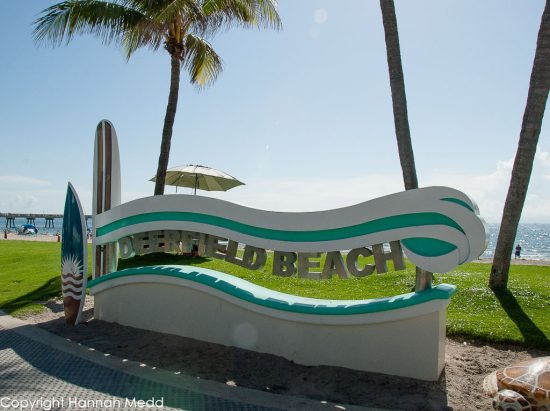 Morning view of the pier 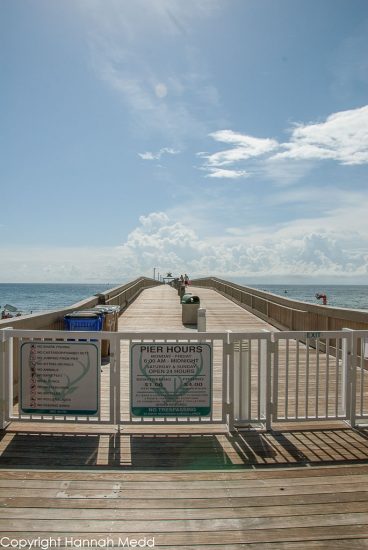 Topside of the pier 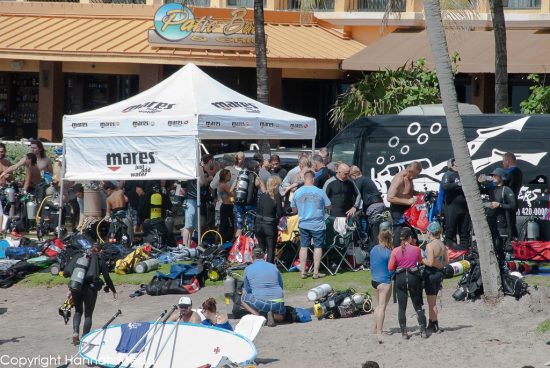 MARES booth at the event 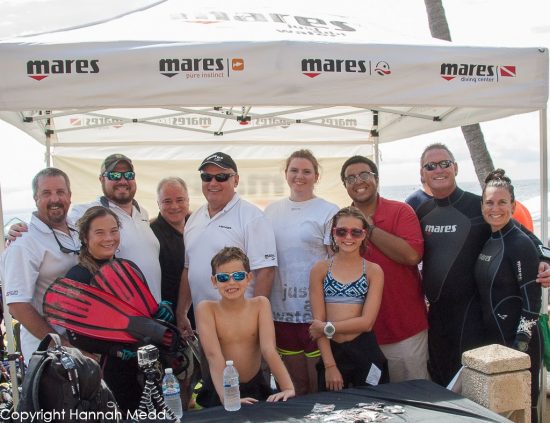 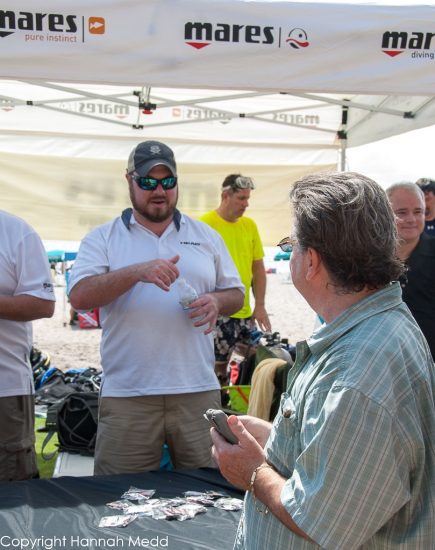 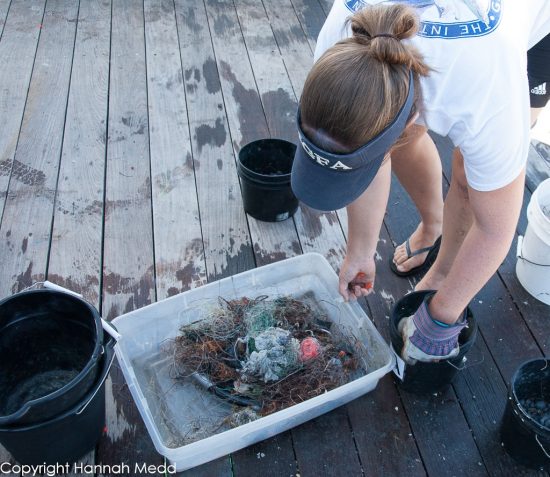 IGFA staff sorting out the debris 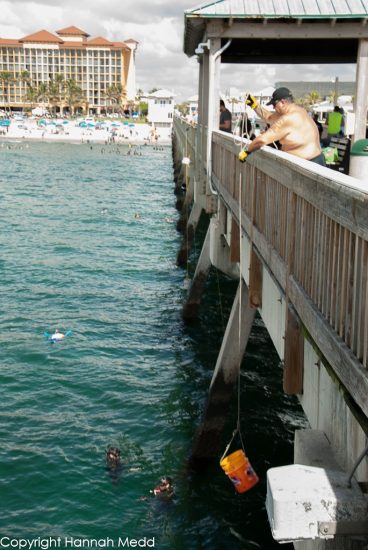 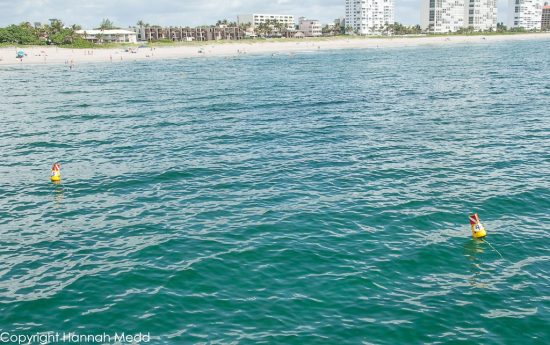 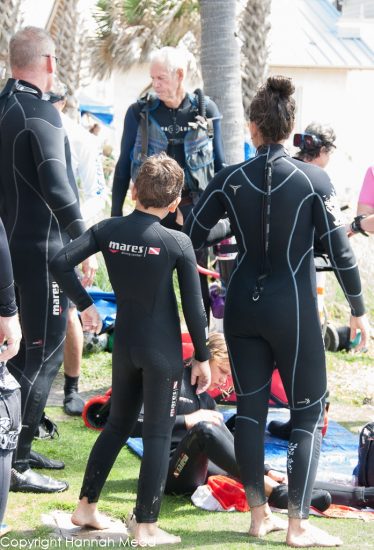 Getting ready to line up for the record attempt 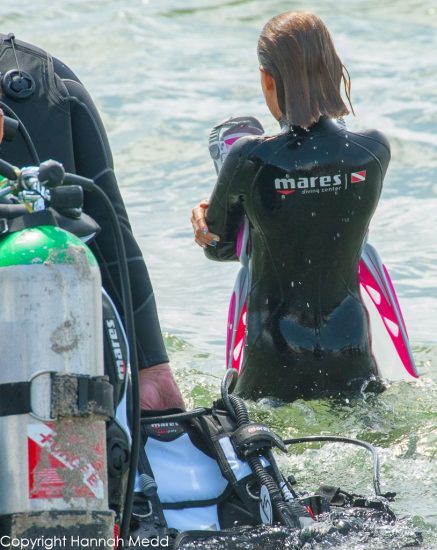 The Steidley family heads out for the attempt 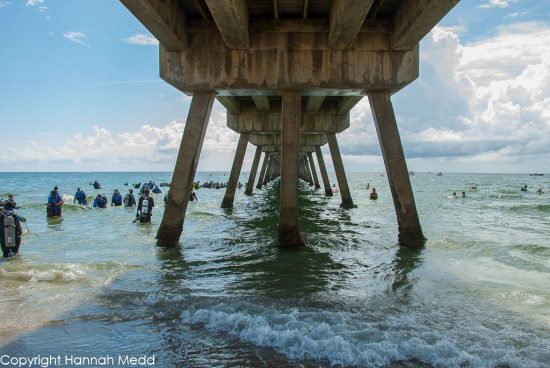 Divers head out around the pier 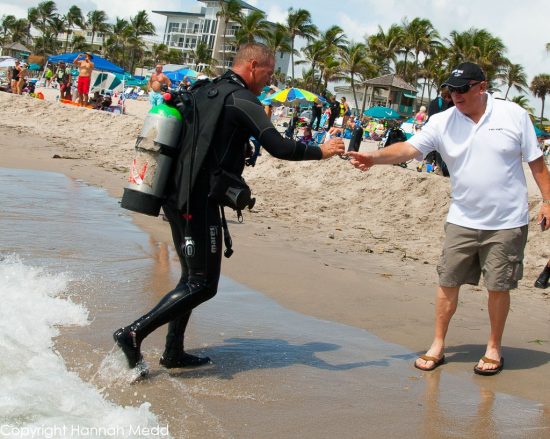 Steidley hands off his sunglasses to MARES VP Steve Lamphear 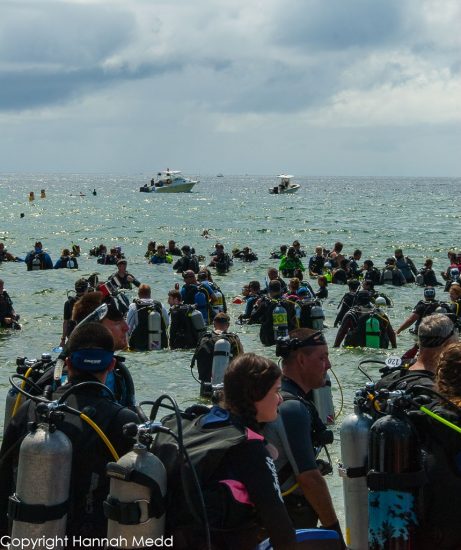 More than 250 divers joining the line 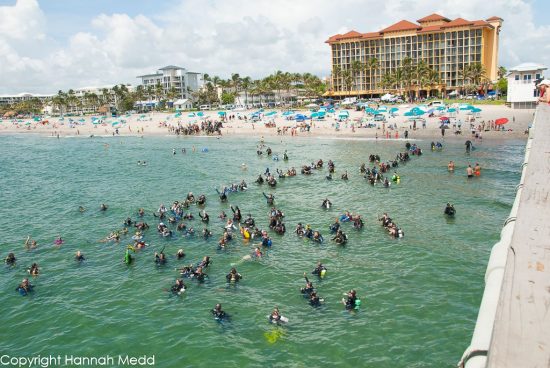 Divers excited to start out 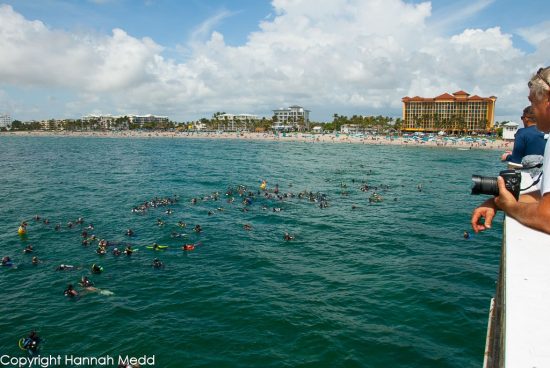 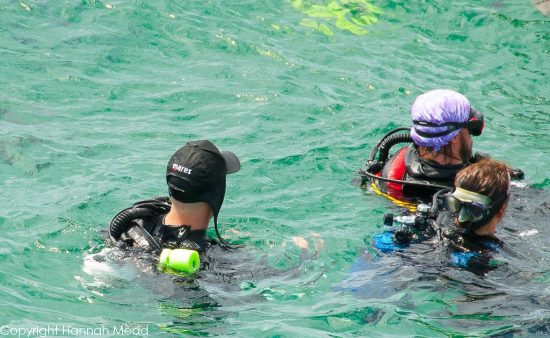 MARES hat made it out for the dive 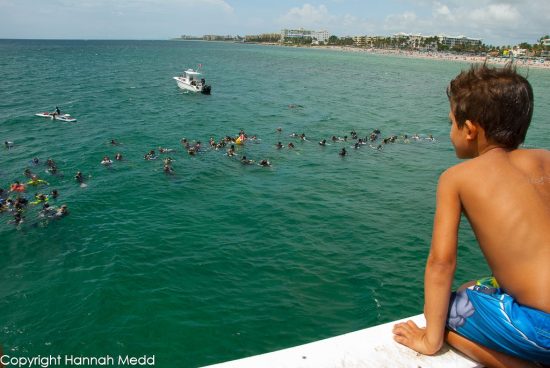 The attempt was overseen by many 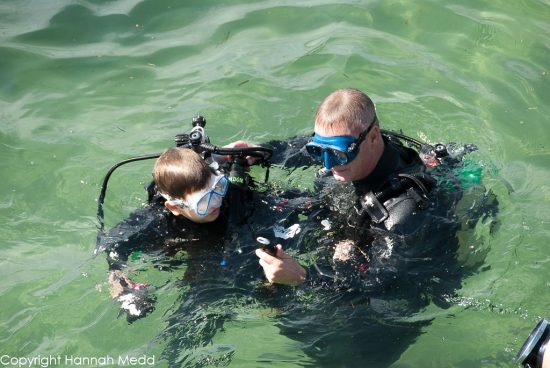 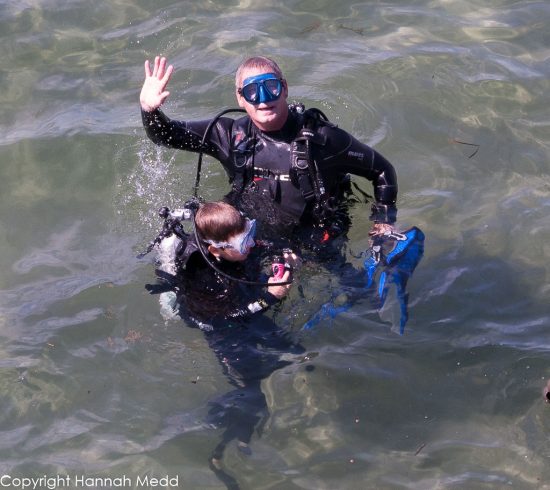 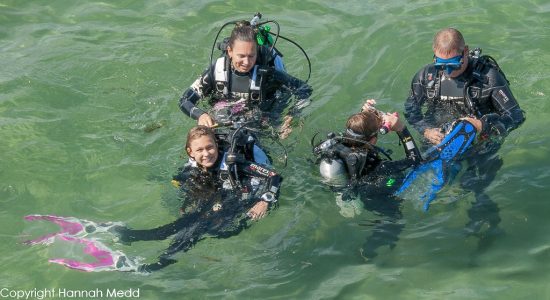 The Steidley headed out to the dive line 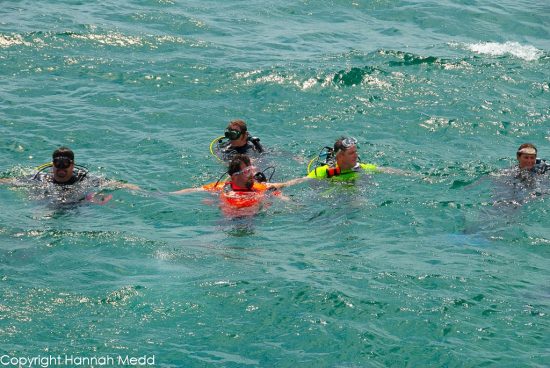 The chain is forming! 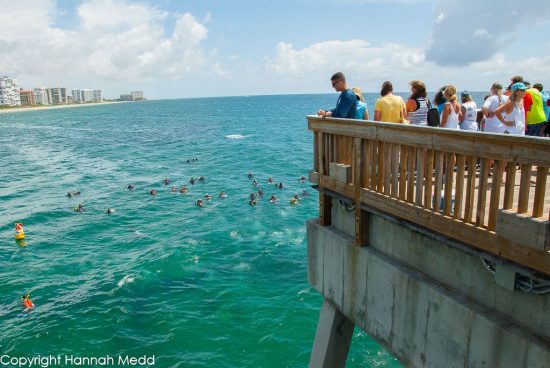 Bubbles showing the chain of divers

The early morning sun was bright on Saturday, June 17th, casting glaring rays from the east atop the water to the edge of the beach where we stood. Beach-goers were laying out their chairs, blankets and coolers along the wide and clean Deerfield Beach in south Florida, USA. And so were hundreds of scuba divers. Not just the typical 10 or 15 divers, there were HUNDREDS. Some were there for the annual pier cleanup dive that has, in the past, attracted the help of over 500 topside volunteers, divers and snorkelers. Most were there to set a World Record. Arilton Pavan, owner of Dixie Divers, the dive shop that organizes the cleanup event, said a customer approached him with the idea of adding a world record dive attempt at the same time since so many divers were already there for the cleanup. Pavan researched the details of the record, contacted Guinness World Records, and officially applied to create the longest chain of human scuba divers. The previous record was set in Thailand in December 2016 with 182 divers making a chain 140 meters long during a dive that lasted just under seven minutes.

Cleanup volunteer divers worked in the early hours of Saturday to rid the base of the pier of debris, plastic, fishing line, and a massive anchor that had been foul hooked and left behind. Members of the International Game Fishing Association helped volunteers topside untangle the debris to ensure all
viable sea life was returned safely to the water. They kept workable sinkers and weights to use in their fishing education programs.  Local groups, like the Women’s Club of Deerfield Beach, conducted public outreach with information tables. Mares, an official sponsor, pitched a tent that offered much needed shade. The Mares staff chatted with divers and the public about diving, the event and their products, handing out lots of promotional material. A few Mares staff were diving, including sales representative Michael Steidley who kitted up with his wife and two children to participate in both the cleanup and the record attempt.

By 10:30 am divers switched out tanks and received their white plastic numbered tags that were affixed to their BCDs so they could be clearly visible. We bumped into Emily who just happened to get the last official number – 240. There were lots of additional divers that were not part of the official
count but still added to the inclusive vibe of the whole attempt. Groups lined up on the beach and headed into the water, kicking out the length of the 976 foot pier to reach the numbered buoys that held ropes to orientate the divers around the end of the pier. It was organized chaos, with shouting and laughing and a little confusion but soon the divers descended and all that was left was a long, semi-circle of bubbles.

Pavan said the City of Deerfield Beach and the local community embraced the event and his aim was to “show everyone that South Florida has the
biggest active scuba community in the world”. It was impressive and inspiring to watch the smiling faces and hear the excited chatter among all divers from different shops, different clubs, different boats, wearing different brands. We are all anticipating the official word from Guinness that the new record will officially be 240 DIVERS!!

ปั้มไลค์ on Jul 16th 2020
Like!! I blog quite often and I genuinely thank you for your information. The article has truly peaked my interest. 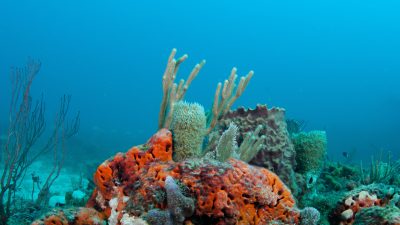 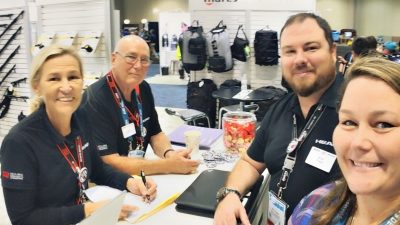 A Sea of Opportunities at DEMA 2017 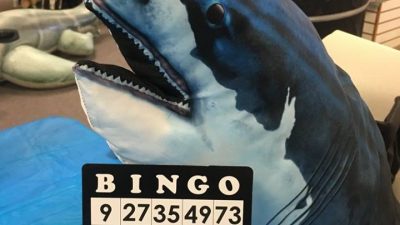 Divers call BINGO to save sharks 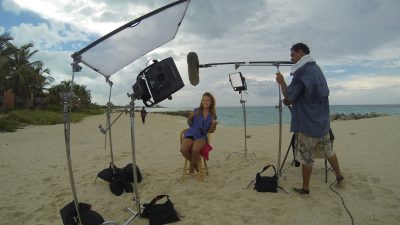