Fishermen from Niendorf and Travemünde supportive of Fishing for Litter 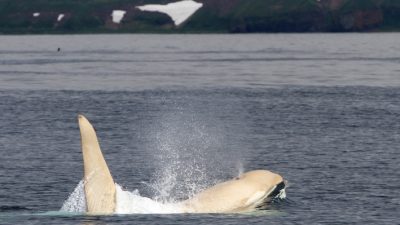 NABU marine expert Kim Detloff, with a collection container. Fishermen can use it to dispose of garbage that have become entangled in their fishing nets for free. (c) Stefan Sauer

Garbage that does not belong in the sea: Near the Baltic island of Rügen, fishermen found rubber boots, fishing pants, doormats, plastic buckets and remnants of old nets. (c) Stefan Sauer

Schleswig-Holstein secures funding of project for another three years

Since the middle of August 2016, fishermen have been able to dispose of
marine litter that get caught in their nets at six ports in
Schleswig-Holstein for free, as part of the Fishing for Litter project.
Two more ports – Niendorf and Travemünde – have recently been added to
the list. In total, fourteen ports along the German North and Baltic
Sea coast are now taking part in the project, with the support of more
than 150 fishermen.

The idea behind the Fishing for Litter project is straightforward.
While at sea, when fishermen come across any marine litter in their
nets, they would put the litter into specially designated garbage bags.
Then, when they return to a participating port, the garbage bags can be
discarded for free into special containers at the harbour. The garbage
is then collectively sorted, analysed and then disposed of.


In analysing the garbage, the contents are checked for their origins
and reusability potential. Based on the findings, effective strategies
can then be developed to enforce and enhance the EU’s Marine Strategy
Framework Directive, among other things.


“Garbage in the sea is a gigantic problem. The project is a prime
example of how fisheries and environmental organisations can work
hand-in-hand to protect our seas. This is the aim of the European
Maritime and Fisheries Fund (EMFF). With the fund, the project now has
more security to plan for the long term,

” said Schleswig-Holstein
Environment Minister Dr Robert Habeck in German, at the inauguration of
the new containers.


With the monetary input of nearly 115,000 Euros from the EMFF, the
Schleswig-Holstein Ministry of the Environment can proceed to allow the
NABU (Nature and Biodiversity Conservation Union) to expand the current
network of participating ports in the Fishing for Litter project.


“We are delighted with the support of the Schleswig-Holstein and the
local fishermen. This brings us a decisive step closer to our common
goal: a comprehensive system for the collection and disposal of marine
debris on Germany’s coasts,


The causes of pollution in the oceans are diverse. Seventy-five percent
of the waste that ends up in the sea are plastics. This is dramatic
because plastics subsequently disintegrate into small particles due to
exposure to salt, friction and sunlight. These particles are almost
impossible to recover from the ocean.

The environmental and economic consequences of pollution are immense.
Many marine animals get entangled in the remnants of discarded nets or
ropes, or they may eat the plastic garbage which subsequently blocks
their digestive tract and causes them to die in agony. People are also
placed at risk, as the plastic attracts pollutants, and this may
eventually end up on their dinner plates.

In addition, coastal
communities around the world have to allocate significant resources to
clear away the marine garbage that regularly washes up on their beaches.