Three freediving world records broken during weekend at the Weissensee 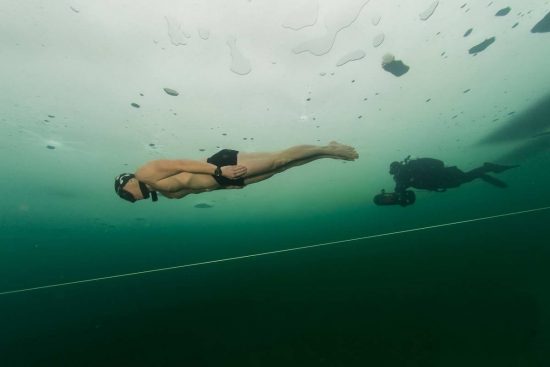 Wearing only a swimsuit under the ice... (c) Sandra Vollmar 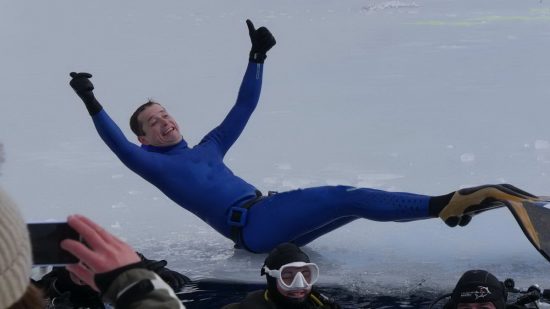 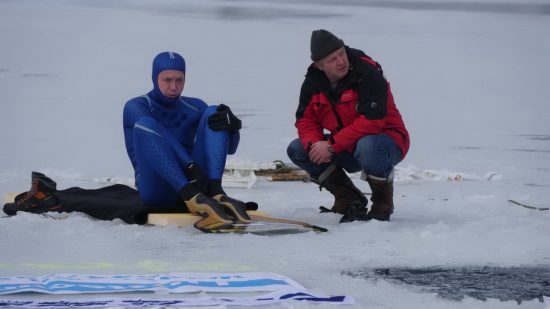 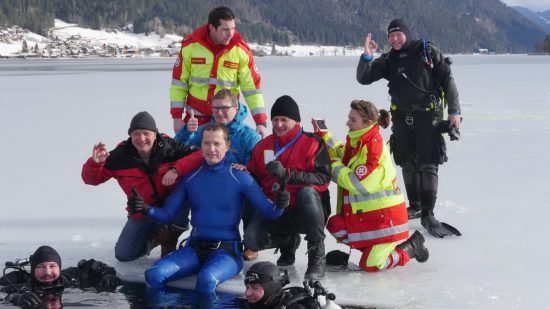 Three freediving world records broken during weekend at the Weissensee

The multiple Swiss freediving champion and world record holder Peter Colat returned to Carinthia's Weissensee in Austria last weekend with a 15-strong team and a new “breath-taking” project. His objective: to break three world records in freediving – all of them under the ice, in the 2-degree Celsius waters of the Weissensee.

The team checks in on Wednesday at the Hotel Moser at the Weissensee. After final meetings in the evening, the record distance would be prepared on Thursday, with the support of Ernest Turnschek and his team from the Divecenter “Tauchsport Yachtdiver Weissensee”. The preparations cover a total distance of 180 metres, the creation of eight holes – comprising entry and exit holes, as well as safety holes (in case of an emergency situation that requires Peter to be brought to the surface immediately) – the laying and fixing of the guideline, and the final test of all equipment. Peter, being the well-prepared athlete he is, uses the afternoon for his final training dives.

After international judge Christian Fötinger measures and verifies the distance, Peter is brought from the hotel to the event on the southern shore of the Weissensee, in Techendorf. There is total silence and a perceptible tingle as the distinctive Swiss freediver prepares.

Then, Fötinger starts the countdown. The safety divers, equipped with oxygen and scooters, station themselves at pre-arranged locations underwater... "Five, four, three, two" – Peter enters the 2-degree Celsius water of the Weissensee and disappears under the ice. On the surface, the referee,  surface team, friends, partners and photographers run from hole to hole. "25 metres passed!" shouts Turnschek. Then, "50!"… "80!"… "110!". The atmosphere is tense. "125!". Excitedly, everyone waits for Peter at the 155-metre mark. A big cheer breaks out as the freediver shows up – with a grin on his face. He takes a deep breath, looks at the referee and, in a calm voice, says "I am OK!" before he starts cheering together with the newly arrived safety divers. Official World Record Number 1: Freediving under the ice with fin; exactly 155.4 metres.

On Saturday, Peter is due to attempt two records: Freediving under the ice without fins in the morning, and – probably the most difficult attempt – freediving under the ice without a suit or fins in the afternoon. The mood is relaxed and friendly. You can tell that professionals are at work. However, a certain tension is in the air. Meanwhile, the television team has arrived and eagerly awaits the commencement of the event. It is the same procedure. The good-humoured but highly focused Peter is brought back to the venue at 10 o'clock. After his breathing exercises, mental exercises and "whow”  he slides into the cold water and disappears under the ice – this time without his Monofin. The world record to break stands at 108 metres, which he intends to beat using pure leg power. Again, everyone runs from hole to hole to keep track of how far he has swum. Accompanied by his safety divers, Peter passes the 80-metre hole – and continues.  Jubilation goes through the crowd – he is going even farther than originally planned! At 110.2 metres, verified by the referee, Peter pops up and, like the day before, you could almost feel that he could have swum much farther! Again, there is the satisfied smile and obligatory "I am OK" signal. Unbelievable! This is Official World Record Number 2: freediving under the ice without fins.

Wearing only a swimsuit under the ice

In the afternoon, possibly the most difficult and dangerous attempt takes place: Peter, wearing only swimming trunks, will freedive under the ice of the Weissensee and attempt a new world record. The tension increases. At noon, he uses the time to briefly rest and mentally prepare. 1400hrs Peter is called. Now, there’s almost a queasy feeling in the air – but the athlete knows his body and limits – and this helps in calming him down.

In normal clothes, Peter walks to the hole in the ice. Everyone is fascinated by what is taking place. All that remains is to see whether the freediver will break this third record and achieve yet another entry in the Guinness Book of Records. The final breathing exercises now take a shorter time – Peter must not remain dressed for too long, with the swimming trunks on the surface. Again, Fötinger starts the countdown. It is quiet. You could have heard a pin drop. The air trembles with tension. Peter dives in. Again, everyone starts running, especially Fötinger, to keep track of which hole he passes. Finally he appears at the 80-metre mark. His expression is one of satisfaction, joy and pride! Again, Peter gives the OK signal, just before the champagne pops! Official World Record Number 3: Freediving under the ice without a suit or fins.

"I am overwhelmed, happy and proud of my team! It was a big project that has never taken place on this scale anywhere in the world – three records on two days – and that's actually the fourth record." The jubilant freediver says in German. "I would like to thank everyone who made this venture possible.  A lot of time, energy and power had been spent putting this idea into reality!"

Peter adds: "This ‘thank you’ applies above all to the Samariterbund Carinthia for their presence on both days; safety divers Marco Jurt and Diego Cintula; photographers Sandra Vollmar and Sabine Kerkau, the judging team of Christian Fötinger and Simon Voglar; Ernest and Karoline Turnschek from Yachtdiver Weissensee and the Hotel Moser; the municipality and tourist office of Weissensee; and, of course, my partner Cornelia Keller, who supports me in all my projects.”

ปั้มไลค์ on May 23rd 2020
Like!! Great article post.Really thank you! Really Cool. 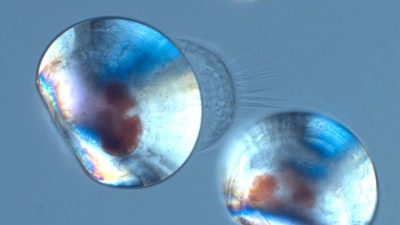