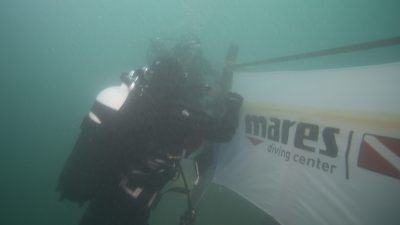 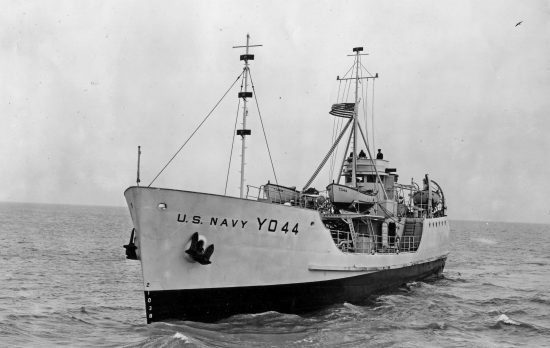 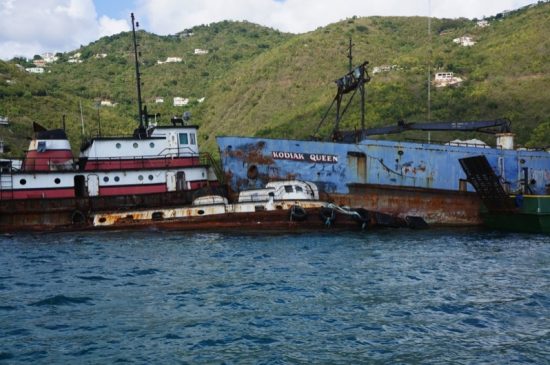 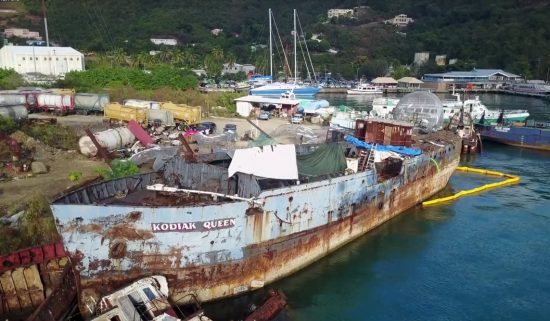 Preparation for its next phase of life as a diving wreck has started. (c) Screenshot FB Video (www.facebook.com/bviartreef) 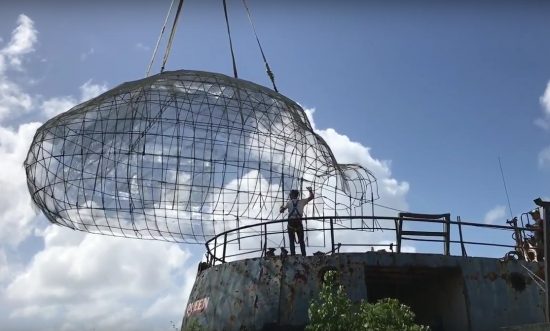 The body of the Kraken is transported to the Kodiak Queen (c) Screenshot FB Video (www.facebook.com/bviartreef) 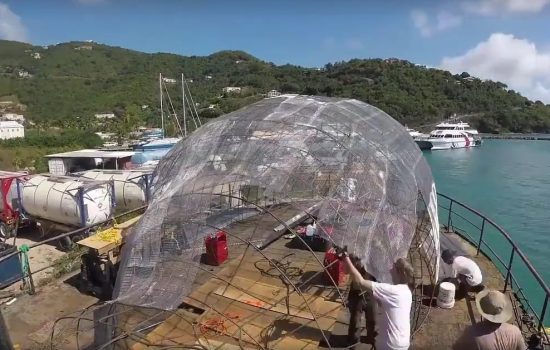 Final work on the body of the Kraken on board of the Kodiak Queen (c) Screenshot FB Video (www.facebook.com/bviartreef) 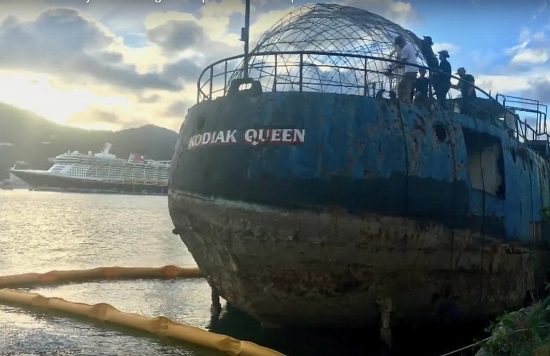 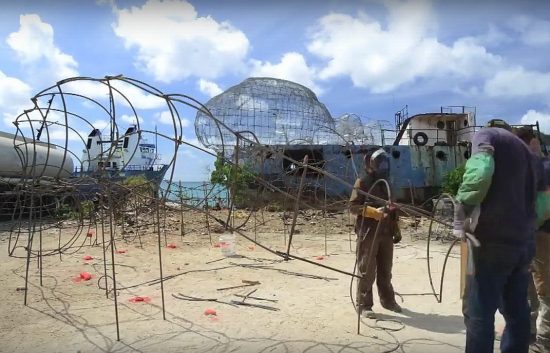 The arms of the Kraken are built next to the Kodiak Queen. (c) Screenshot FB Video (www.facebook.com/bviartreef) 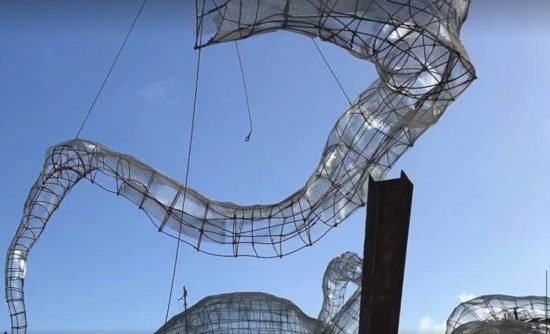 One of the giant arms is lifted on board of the Kodiak Queen. (c) Screenshot FB Video (www.facebook.com/bviartreef) 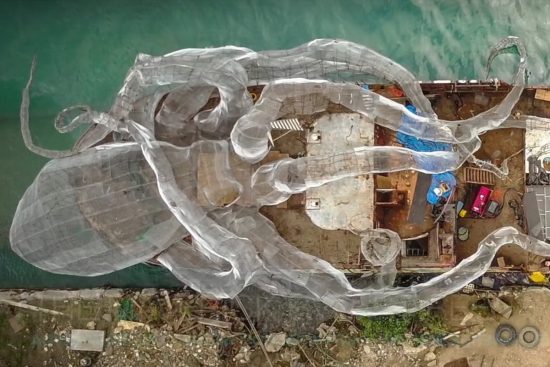 Kodiak Queen and the Kraken - ready for its next life as diving wreck (c) Screenshot FB Video (www.facebook.com/bviartreef)


These days, weather permitting, a ship is scheduled to sink. Nothing
special? In the course of the day, the Kodiak Queen is to be sent to
the bottom of the sea in the British Virgin Islands off the coast of
Virgin Gorda – by no less than British billionaire Richard Branson. It
is slated to become an artificial reef for sports divers.

At first glance, it looks like just another old warship. However, on
closer inspection, an incredible story lies behind its unassuming
exterior.


The Kodiak Queen has a turbulent history covering more than 75 years.
During the Second World War, it was a navy ship named YO-44. It was one
of the five ships that was caught in the devastating air attack by the
Japanese on Pearl Harbor on 7th December 1941, surviving it without
injury.

With 12 crew members, the small ship had almost 380,000 litres
of highly inflammable aircraft fuel in the tanks at the pier next to a
submarine.

When the Japanese surprise attack began at 7:48 am, the crew wanted to
get to safety, but the submarine commandant urged them to immediately
move the “floating bomb” before they were all hit by an explosion. The
crew followed the orders and chugged the small tanker in the bomb hail
into a bay where there were no ships and fled through the canal exit of
the port across the open sea to the western side of Oahu.

After the war, the historic ship had been decommissioned by the Navy
and converted into a fishing boat in the 1960s. Its final years were
spent at a pier in Roadtown on the island of Tortola, the largest
island of the British Virgin Islands, and was due to be scrapped.

Along came 66-year-old Richard Branson, who was encouraged by a friend
to explore this project. With him as one of the most colourful figures
in the British business world, the Virgin Group is a consortium of many
companies. With assets at an estimated five billion US dollars
(according to Forbes 2016), Branson has always been involved in very
special projects.

At 22, he founded Virgin Records. After signing Mike Oldfield, Branson
enjoyed immediate success through the release of the album Tubular
Bells. At 29, he bought Necker Island, a 30-acre private island in the
British Virgin Islands. The only house on the island, of course,
belongs to him.

Branson also operates a successful airline in Virgin Atlantic Airways,
and manages to finds the time as a successful entrepreneur to live out
and realise his fantasies.

In 1986, he made the fastest Atlantic
crossing in a speedboat. A year later, he flew over the Atlantic in a
hot air balloon. In 2011, he built the dive boat Virgin Oceanic, in
which he plans to descend to the deepest parts of the Mariana Trench
and the Atlantic.

However, Branson is not only an entrepreneur with a golden hand and a
multi-faceted adventurer; he has also been working intensively on
climate protection, and species and oceanic protection for years. Much
attention was given to the support of former President of Costa Rica of
his efforts to protect sharks. In January 2013, Branson received the
"Shark Guardian of the Year" award from Sharkproject.

Branson is, of course, also a diver and wants, if everything goes smoothly, dive the wreck one of the next days.

As a preparation for its next phase of life, the ship has been
completely gutted and is free from all dangerous contaminants. As a
special gag, the support group won by Branson for this project
constructed a 25-metre-long giant kraken, which clings to the ship's
stern with its eight long tentacles, as if it had just pulled it
underwater. The frame of the octopus was welded with round steel and is
fixed firmly to the ship.


After the sinking, subsequent work on the wreck will be carried out
with consultation with experts and volunteers, as Branson and his
assistants, with the support of marine biologists, want to create an
artificial reef with a wealth of species at the historical wreck. In
particular, Branson hopes to bring about the increase of the goliath
grouper population.

Thus, Branson wants the wreck not just for the entertainment of sports
divers, but also for the creation of an flourishing artificial reef.


With the wreck, so much income is to be achieved that the project is
almost self-financed. Until now, Branson and his supporters have
already taken care of the appropriate start-up investment from their
own pockets. An estimated four million dollars have been used to clean
and prepare the ship, and to build the octopus. We hope that
this would prove to be money well spent (we mean, “sunk”...) 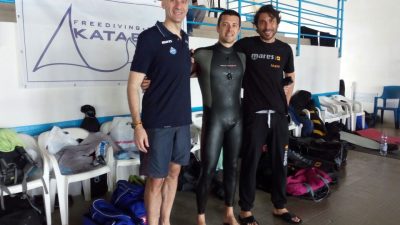