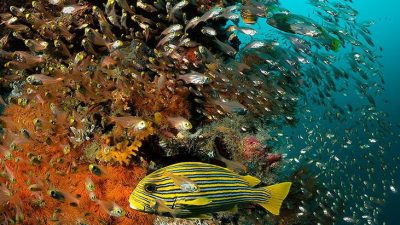 Which contains more zooplankton? The samples on the left are from healthy reefs while those on the right have been affected by ocean acidification. (c) Joy N. Smith

Ocean acidification can fundamentally change the structure of the reef

Tropical coral reefs can lose up to two-thirds of their zooplankton as
a result of ocean acidification. A German-Australian team of
researchers came to this conclusion after studying the carbon dioxide
seepage at coral reefs off the coast of Papua New Guinea.

Researchers cite the loss of suitable hiding places as the cause of the
zooplankton’s decline. Instead of densely branched staghorn corals,
helmet-shaped hard corals that offer zooplankton little shelter grow in
their place. This change in the coral reef community has come about due
to increasing acidification.

Since zooplankton is an important food
source for fish and coral, the subsequent impact on the food web of the
coral reefs are far-reaching, as the research team reports in a study
recently published in the online portal of the Nature Climate Change.

For the scientists, the volcanoes off the coast of Papua New Guinea,
with their unique properties, are like an open-air laboratory. “Here,
we can observe under natural conditions how the reefs change because of
climate change, as they absorb more carbon dioxide from the atmosphere
and the acidity of the water rises,
” said  coral expert and co-author
Prof Dr Claudio Richter in German. He is the Head of Section
Bentho-Pelagic Processes at the Alfred Wegener Institute, Helmholtz
Centre for Polar and Marine Research.

The degree of ocean acidification is indicated by the water’s pH value.
For the tropics, the ocean usually has a pH value of 8.0 or higher. The
lower the value, the more acidic the water, and this may cause the
disappearance of coral reef species.

Our study shows that ocean acidification can fundamentally change the
structure of the reef, said lead author Joy Smith, from the Australian
Institute of Marine Science. Under normal conditions, staghorn corals
with their forked branches offer many places for zooplankton to hide;
however, under acidified conditions, the hard corals that grow in their
place offer limited hiding places, she added.

As a result, reefs lose as much as two-thirds of their zooplankton.


“This decline has far-reaching consequences for the reef community. For
one thing, many fish species feed on zooplankton. Corals are also
dependent on them. With the oceans becoming warmer and more acidic,
corals need to use up more energy to build their calcium carbonate
skeletons. To satisfy this additional energy requirement, as well as
their need for nitrogen and phosphorous compounds, the corals would
consume more plankton – something that would be more challenging due to
increased ocean acidification,


For this study, the researchers had examined two reefs in the Milne Bay
Province of Papua New Guinea on three separate occasions. They found
that both reefs had portions with a pH value of 7.8 and also portions
with a normal pH value. Thus, they were able to do a comparison at both
reefs.

The 29 different groups of zooplankton hide in the reef during the day
and then ascend to feed in the upper water column during the night.

“To
our surprise, up to three groups of zooplankton had been affected by
ocean acidification. But none has completely disappeared,

Lead author Joy N Smith was funded through the EU doctoral programme
“MARES”. She graduated at the Universities of Bremen and Plymouth. 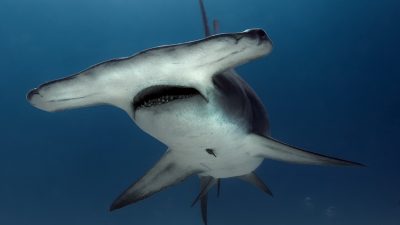